After a crazy week that saw the Euro lose some ground, another busy week awaits us, with inflation and employment figures being the highlights. Here’s an outlook for the European events and an updated technical analysis for EUR/USD.

The collapse of the government in Portugal, the credit downgrades and the soaring yields, all pave the bailout. News from Portugal will continue influencing Euro/Dollar, and there are quite a few indicators. Let’s start. 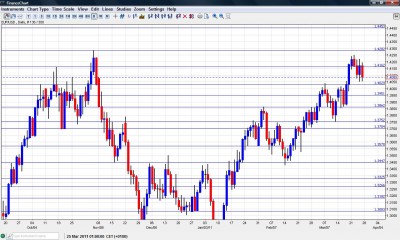 Looking up, initial yet weak resistance appears at 1.4160. This was a peak quite some time ago and recently worked as pivotal line separating the lower and higher ranges of trade. Much more important resistance is at  1.4282 – this is the peak that EUR/USD touched just after QE2 was announced in November. The highest level in a year couldn’t be reached.

Further above, we already encounter rather veteran lines of resistance. 1.4450 served as resistance at the beginning of 2010. It’s followed by 1.4580 which was a peak at the same period of time and worked as support earlier.

Looking down, initial and very strong support is close, at  1.4030 This line, that was a peak in September was a distinctive support line, and after the convincing break higher, it wasn’t even challenged.  It’s followed by 1.3950, that worked as minor support in the past weeks and also worked as a pivotal line around November.

Further below the pair will meet 1.3860, which cushioned falls recently and was also a peak earlier in the year.  Even lower 1.3760 is another significant line, that held the pair earlier this month and in the past as well.

Just below it, we find 1.37, a round number that also works as minor support.  1.3570 is the next line below, that prevented quite a few falls. The last line for now is 1.3440, which worked as support for the third time in the past year, and is the lowest level in two months.

I am bearish on EUR/USD.

A bailout for Portugal is here, as the government failed to pass the budget and collapsed. With yields of over 8%, there’s only a bit of denial left before it happens. And on the other side of the Atlantic, we now discover that also the Federal Reserve can be hawkish, matching the “strong vigilance” of Jean-Claude Trichet.

Here are some extra recommended reads about Euro/Dollar:

Grega Horvat Grega is based in Slovenia and has been involved in markets since 2003. He is the owner of Ew-Forecast, but before that he was working for Capital Forex Group and TheLFB.com. His feature articles have been published on FXstreet.com, Thestreet.com, Action forex, Forex TV, Istockanalyst, ForexFactory, Fxtraders.eu, Insidefutures.com, etc. He recently won the award on FXStreet.com for Best Forex Analysis in 2016. At Ew-forecast he helps clients and educates them about the Elliott wave principle and how to label and track unfolding patterns in real time. His approach to the markets is mainly technical. He uses a lot of different methods when analyzing the markets such as candlestick patterns, MA, technical indicators etc. His specialty, however, is Elliott Wave Theory which could be very helpful especially if you know how to use it in combination with other tools/indicators. EW-Forecast To be involved in the market effectively, you need the right guidance and resources, and our team can help you to achieve that. Our team is providing advanced informations about Elliott Wave theory in real time. The Elliott Wave Principle gives you a method for identifying the behavior of the markets and at what points the market is most likely to turn. We help new traders who are interested in Elliott Wave theory to understand it correctly. We are doing our best to explain our views as simple as possible with educational goal, because knowledge itself is power!

After a crazy week that saw the Euro lose some ground, another busy week awaits us, with inflation and employment figures being the highlights. Here's an outlook for the European events and an updated technical analysis for EUR/USD. The collapse of the government in Portugal, the credit downgrades and the soaring yields, all pave the bailout. News from Portugal will continue influencing Euro/Dollar, and there are quite a few indicators. Let's start. EUR/USD chart with support and resistance lines marked. Click to enlarge: Jean-Claude Trichet talks: Monday, 15:00. The president of the ECB will have another chance to clarify that…