Euro/dollar  turned back and retreated as relief for Greece still isn’t at hand. The Greek drama continues with hopes and doubts regarding a final approval for the Greek bailout. Among the regular events, the rate decision stands out. Here is an outlook for the upcoming events and an updated technical analysis for EUR/USD.

The ECB lent almost â‚¬530 billion to banks in the second LTRO, or indirect QE. Together with the delay for Greece and the subtle hints of improvement in employment by Bernanke, 1.35 couldn’t be broken. At least 5 things could still go wrong with Greece. Will the pair make another attempt to rise, or is this the beginning of an avalanche?

Updates: Moody’s joined other rating agencies and lowered Greece’s rating to C, the lowest possible. It said that the Greek deal is a  distressed exchange, and hence a default. There is a growing concern that the deal will not find enough “volunteers”. The Euro continued to sag on the news that Greece  might declare bankruptcy, dropping below the 1.32 level to 1.3197. EUR/USD continued to lose ground, trading at 1.3139, as the Greek bond swap is still not a done deal.  Retail sales posted a 0.3% gain. Revised GDP dropped by 0.3%, its worst reading since 2009. German Factory Orders surprised the markets, plunging 2.7%. Euro broke through the January Support Line,  as the trend is clearly bearish  for EUR/USD.    German Industrial Production climbed 1.6%, a sixth-month high. EUR/USD barrelled above the 1.32 level, trading at 1.3225. 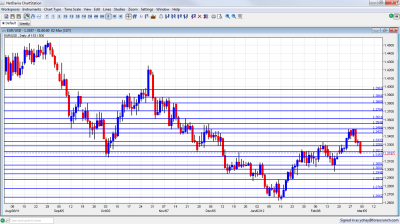 Euro/dollar slid lower at the beginning of the week, but then made another attempt on 1.3486, a new line that didn’t appear last week. After this attempt failed, the pair fell and lost a lot of ground, closing much lower.

In case the rally resumes, we’ll start from relatively high ground. 1.38, that stopped the pair in September and also later on is weak and now not so distant resistance. 1.37 had a similar role at the same time and also worked as support afterwards. It is stronger resistance.

1.3486 was a distinctive double top in February 2012 and is a strong cap. It’s closely followed by minor resistance at 1.3437. The pair struggled there.

1.3333 provided some support for the pair during December 2011 and remains important despite being fought over at the beginning of March 2012.  Quite close by, 1.3280 proved to be strong in both direction, including in recent weeks.

1.3212 held the pair from falling and switched to resistance later on. This was the bottom border of tight range trading in February. 1.3150 is the lowest point recorded in October 2011, is now a pivotal line in the middle of the range.

1.3050 was the top border of a very narrow range that characterized the pair towards the end of 2011. It is now serious support on the downside after serving as the bottom border of the range and despite a temporary move under this line.  The round number of 1.30 is psychologically important but is much weaker now. It was a pivotal line before Bernanke’s rally.

The 1.2945 line is stronger once again and still provides support.  1.2873 is the previous 2011 low set in January, and it returns to support once again. This is a very strong line separating ranges.

The delay in announcing a credit event and a curious need for another “final assessment” for Greece’s prior actions raise the suspicion that Greece will never get the bailout funds.  At least 5 things could go wrong and trigger another delay, yet time is running out and the chances of a Greek bankruptcy announcement on March 23rd are rising.  This is the baseline scenario of the special report for Greece. Join the newsletter below to download it.

In addition, the LTRO also has two negative consequences for the euro: banks are now better prepared, and Greece could be let ago. Secondly, the ECB’s balance sheet is now larger than that of the Federal Reserve. This indirect QE will eventually indirectly devalue the euro.

On the other side of the Atlantic, things are OK. Ben Bernanke was indeed soft, but didn’t supply a convincing case for QE3 in March. If the NFP isn’t a disaster, QE3 will be delayed like the Greek bailout. 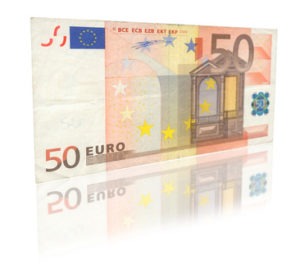 Euro/dollar  turned back and retreated as relief for Greece still isn't at hand. The Greek drama continues with hopes and doubts regarding a final approval for the Greek bailout. Among the regular events, the rate decision stands out. Here is an outlook for the upcoming events and an updated technical analysis for EUR/USD. The ECB lent almost â‚¬530 billion to banks in the second LTRO, or indirect QE. Together with the delay for Greece and the subtle hints of improvement in employment by Bernanke, 1.35 couldn't be broken. At least 5 things could still go wrong with Greece. Will the…