Euro/dollar  continued lower in a week that saw continued pressure in bond markets and a growing need for serious ECB intervention. The upcoming week consists of 7 events. Here is an outlook for these events, and an updated technical analysis for EUR/USD, now in lower ground.

Fresh GDP figures have shown that the recession hasn’t arrived to Europe in Q3  although Italy is hiding its figures. The chances are much higher in Q4 as the debt crisis is spilling into the real economy with bond yields screaming in every country apart from Germany. This isn’t only the prices in secondary markets: bond auctions are reflecting the  sustainability  of the debt. Italy has a new government, but the powers of Mario Monti are limited. Europe is awaiting another Mario: Mario Draghi – the president of the ECB. Will we see European QE? Perhaps via the IMF.

Updates: A downgrade for France is on the cards once again, and this weighs on the euro despite a decisive outcome in the Spanish elections. Yields remain high and this weighs on the euro. Also Greece is too close to running out of money. In addition, the fears of a global downturn strengthened after US GDP was downgraded for Q3. European PMIs came out a bit above expectations, but this doesn’t help the common currency: problems with the Dexia deal as well as contraction in Chinese PMI sent eh pair close to critical support at 1.3420. See how to trade the German IFO Business Climate with EUR/USD. The euro was knocked down below support on the failed German bond auction, and is now in a new range: 1.3320 – 1.3380. Will this trigger Quantitative Easing?  The Germans still refuse using the ECB, even though a credit crunch looks more real than ever. Italy paid a whopping 6.5% for a 6 month auction. It just gets worse, and EUR/USD is not too far from the 1.3144 low. 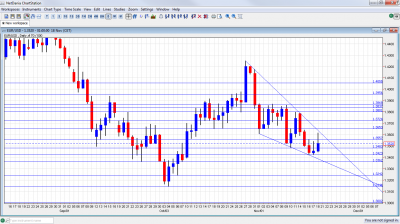 After making a Sunday gap above 1.3838 (mentioned  last week), euro/dollar fell sharply and was capped by the 1.3550 line and supported by 1.3420. It then managed to make another attempt higher but eventually returned to range.

As the pair is lower now, we begin from a lower point. 1.4050 capped recovery attempts in October and beforehand worked in both directions.  1.3950 was a notable bottom during May and a strong cap in during October before the short lived break higher.

Now we have a few crowded lines: 1.3868 was a peak during November and was challenged for a another time. 1.3838, which was a swing low a few months ago and was later tested on a failed recovery attempt, is now somewhat  weaker but still relevant, holding back attempts to rise.

The round number of 1.38 is another minor line, capping a recovery attempt in November. 1.3725 worked as support several times in October and served as a pivotal line in the range.

A strong line is 1.3650, which worked quite well in recent weeks, and was only temporarily breached. It is one of the more distinct lines in the range. 1.3550 provided support early in September and then switched to resistance after the fall. It proved it can work as good resistance as well.

1.3480 is more minor now after being a pivotal line in the range. It also had a role in September. The fresh low of 1.3420 in November is another line on the way down and is more important.

The bottom seen earlier in October  at 1.3360 is the next line. It is an important pivotal line.  More important support is at 1.3250 which held the pair early in the year.

Very important support is at 1.3145 which is the lowest point seen in the current round of the crisis. The round number of 1.30 is psychologically important, before the low of 1.2873 seen early in the year.

Apart from Germany, all other continental bonds are rising. The pressure for an ECB intervention is rising. If the ECB does not step up its efforts, the crisis could worsen. Also German bunds are not forever immune – only money drains out of these bonds, it drains out of the continent – the euro could crash in such a scenario. If it does act, through the IMF or under another constellation, there might be a short lived rally, until the market realizes that this is  Quantitative  Easing, or euro printing, which will devalue the currency.

Euro/dollar  continued lower in a week that saw continued pressure in bond markets and a growing need for serious ECB intervention. The upcoming week consists of 7 events. Here is an outlook for these events, and an updated technical analysis for EUR/USD, now in lower ground. Fresh GDP figures have shown that the recession hasn't arrived to Europe in Q3  although Italy is hiding its figures. The chances are much higher in Q4 as the debt crisis is spilling into the real economy with bond yields screaming in every country apart from Germany. This isn't only the prices in secondary…