Euro/dollar  sank together with Berlusconi, but managed to recover some of its losses. Where is it headed now? GDP figures are the highlights of the upcoming week. Here is an outlook for the market moving events, and an updated technical analysis for EUR/USD.

Italian yields crossed the “bailout barrier” of 7% and this alarmed the markets. After Italy’s institutions made progress on passing new austerity measures and some serious intervention from the ECB, the winds changed and the euro managed to recover. Italy is now expected to follow Greece and appoint a non-politician as the head of state. In the meantime, the economies aren’t doing well: there are clear signs that the euro-zone is already in recession as contagion reaches the core. The idea of transferring ECB money through the IMF is gaining traction, and this sent the euro temporarily higher.

Updates: After a nice gap higher, the pair resumed its falls and is struggling with the 1.3650 line once again. The Italian bond auction has shown that Berlusconi’s departure isn’t sufficient to restore confidence in Italy. EUR/USD is at the lower range as yields continue rising and sentiment falls. The euro continues to dig lower, but very gradually. Italy’s hidden GDP doesn’t help it.

EUR/USD chart with support and resistance lines on it. Click to enlarge: 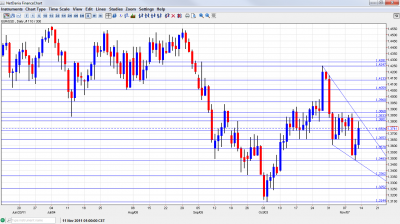 Euro/dollar started the week with a first attempt to rise. This resulted in a deep fall, all the way down to 1.3480 (a new line that didn’t appear last week). A gradual recovery turned into a strong one, until the pair bounced off resistance at 1.38 and close at 1.3740.

We start somewhat lower this time. 1.4282 was the peak in November 2010 and played an important role afterwards as well. It is closely followed by 1.4250 which was the peak of a recent short lived surge in October and also when the euro was climbing earlier in the year.

1.42 was a minor line of resistance in May and remains minor resistance in the distance. The pair managed to hold on to 1.4130 before collapsing at the end of October, and this is a new line on the chart.

1.4050 managed to cap recovery attempts in October and beforehand worked in both directions.  1.3950 was a notable bottom during May and a strong cap in during October before the break.

1.3868 was a peak during November and was challenged for a second time. 1.3838, which was a swing low a few months ago and was later tested on a failed recovery attempt, is now somewhat  weaker but still relevant, holding back attempts to rise.

The round number of 1.38 is another minor line, capping a recovery attempt in November. 1.3725 worked as support several times in October and served as a pivotal line in the range.

1.3650 worked quite well in recent weeks, and was only temporarily breached. It is one of the more distinct lines in the range. 1.3550 provided support early in September and then switched to resistance after the fall. It worked better as support, but is now resistance.

1.3480 was a trough in November and also back in September and is now strong support.  The bottom seen earlier in October  at 1.3360 is the next line. It is an important pivotal line.

More important support is at 1.3250 which held the pair early in the year. The recent 9 month low at 1.3145 is the next important line that will be closely watched on any downfall.

A sharp and narrowing downtrend channel is beginning to emerge and can be seen on the graph. Downtrend resistance begins at the end of October and is formed with the recent rise. Downtrend support was formed later on.

Even if Berlusconi is ousted soon enough and the market celebrates new austerity, this doesn’t mean the end of trouble for Italy. In order to get Italy back to a path of sustainable debt, stronger efforts by the ECB are needed, in addition to the EFSF. This can turn into full scale QE, which will weigh on the euro. The rise in German/French spreads is worrying  as well. And while Greek citizens lost control of their country, this doesn’t mean that this sage is over. All signs point to a recession, and policymakers already  acknowledge this downturn.  In the US, a recession seems less likely now, as positive signs keep coming in.

Euro/dollar  sank together with Berlusconi, but managed to recover some of its losses. Where is it headed now? GDP figures are the highlights of the upcoming week. Here is an outlook for the market moving events, and an updated technical analysis for EUR/USD. Italian yields crossed the "bailout barrier" of 7% and this alarmed the markets. After Italy's institutions made progress on passing new austerity measures and some serious intervention from the ECB, the winds changed and the euro managed to recover. Italy is now expected to follow Greece and appoint a non-politician as the head of state. In the…