Two major German surveys are the highlights of this week’s European events. Here’s an outlook for these events, and an updated technical analysis for the strengthening Euro. 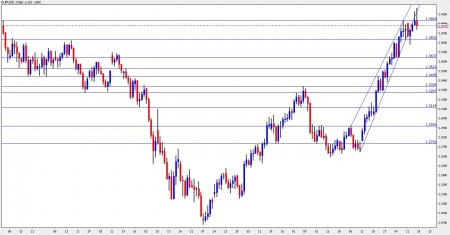 EUR/USD started higher, but quickly dropped and briefly went below 1.3830. It then climbed and made an impressive break above the important 1.4029  line. But the finish of the week was bad, sending it to close at 1.3975, close to last week’s close.

EUR/USD is capped by 1.4029 – this line was a peak in February and was conquered in the past week, although the Euro couldn’t settle above it. The round 1.40 level is eyed by many politicians.

Higher, 1.4217 capped the pair back in January and worked as a support line in December. Above, 1.4450 worked as a support and resistance line during that same period of time and is relevant as well. The next level is 1.4580 which was a stubborn peak around January as well.

Lower, 1.3530 worked as support at the beginning of the year, and had a minor role in September. Below, 1.3435 provided strong support in February and is now a minor line as well.

The next lines below are 1.3267, which provided support recently, and 1.3114, which worked in both directions many times in the past. There are more lines below.

The steep uptrend channel that accompanied the pair in the past six weeks was broken too many times. EUR/USD closed below it. It still appears on the charts, but it’s importance is lower now.

I remain bearish on EUR/USD.

With the loss of uptrend support, the failure to hold above 1.40 and the calls for a weaker all support a drop. The main driver of the Euro higher in recent weeks, the new quantitative easing program in the US, seems already fully priced in the greenback’s weakness.

How To Get Ready For The New CFTC Rules

Two major German surveys are the highlights of this week's European events. Here's an outlook for these events, and an updated technical analysis for the strengthening Euro. EUR/USD  daily chart with support and resistance lines marked. Click to enlarge: EUR/USD managed to overcome the loss of uptrend support, and continued moving forward. Will it make more gains now? Let's start: German ZEW Economic Sentiment: Tuesday, 9:00. 350 analysts and institutional investors participate in this all-important survey. For the first time in a few years, the index fell below 0 - meaning pessimism about the future. This came after months of…