There are lots of worries in the old  continent and a bank run cannot be excluded.  However, there are reasons to be bullish on EUR/USD or at least not seeing it plunge. Here are two opinions:

EUR/USD Unlikely To Hit A New Cycle Low: Where To Target? – SocGen

The post-referendum fall in sterling has been precipitous, but orderly.  The UK 10Y real yield currently matches the record lows reached in the spring of 2013. Interestingly, the nominal trade-weighted sterling is currently at levels prevailing in March 2013 too, with cable being much lower but EUR/GBP still slightly short of the 2013 highs (~0.88). Sterling’s fall has followed the drop in the UK’s real yields. This is not to dismiss the dangers inherent in the UK running a huge current account deficit, but there is no sign of panic currently in the pound’s depreciation.

One major flipside of the precipitous sterling weakness is euro strength,  compounded by the persistent though more gradual decline in the renminbi. The ECB’s nominal trade-weighted euro exchange rate has risen by 4% over the past year and 2.4% calendar year-to-date. It has admittedly not appreciated much since April 2017, but is trading at the higher end of the oneyear range.

Continued depreciation of sterling and renminbi against the euro into year-end looks likely,  however, while offsetting yen strength is now coming up against mounting risks of market intervention with USD/JPY at 100/101. This obviously confounds the ECB’s attempts to ease monetary conditions further in the Euro area (EA), where deflationary pressures remain. Moreover, there will be a negative growth impact from Brexit, which could cost the region 0.1pp of GDP per annum by 2020 (or 0.7pp of GDP on a cumulative basis) according to our European economists.

In this regard, the global macro environment has become more difficult for the ECB in the aftermath of the UK referendum. Half the EA’s sovereign bonds are yielding less than zero. The German 10-year Bund yield fell to a record low of -0.205% recently for example.  European yields are basically a lot closer to the lower nominal bound now than US or UK bond yields.  One consequence is that the euro is becoming resistant to monetary-induced weakness.  The ECB’s trade-weighted euro has been about flat since 23 June, despite the hit to the region’s growth outlook from Brexit.

The relative strength of the euro is a symptom of the ECB approaching the effective limits of its policies. This is a key factor in our expectation that EUR/USD is unlikely to hit a new cycle low over the next year, and our view that EUR/USD is trading off Fed expectations more than ECB policies.

Europe’s policy response:  Despite the recent increase in asset volatility, Brexit is still regarded as a local event by us. Europe and its weak European banking sector may be affected, but there could still be  a policy response preventing weak European balance sheets becoming a global issue at this stage. In summer 2007 too, investors regarded US subprime as a local issue requiring a local policy response. Related adds of central bank liquidity pushed USD sharply lower and commodities received another shot in the arm, helping EM assets and economies to stay strong.

Helping Italy: Italy’s struggling banking sector is center stage. Of course, Italian banks’ EUR360bln of nonperforming loans are large relative to the size of the Italian economy and the size of bank balance sheets, but potentially not big enough to cause systematic risks on a global scale(see our bank analyst’s write-up). However, there is a political dimension to this problem which has the potential to impact markets globally, coming into force if PM Renzi loses his Senate referendum in October, not only creating a political vacuum should PM Renzi resign, but also increasing the probability that Italy installs an EMU-critical government aiming to take Italy out of the currency union. Italian retail sales – a reflection of Italy’s tense political climate- have dropped to a 31-month low.

Bank rescue may trigger a EUR rally:  We see EUR trading within a binary framework. Should investors put the existence of EMU into question – which could happen should Italy bring in a euro skeptic government- then we believe that EUR would sell off hard. Over recent days when Italian bank debt and its share price development dominated news, the break-up risk premium increased,causing EURUSD to trade moderately lower. A precautionary bank capital injection would buy EMU sometime. Consequently, the EMU break-up risk premium would decline and hence EUR would rally.

We reiterate our call for EUR to trade higher from here unless populism changes the political landscape, putting EMU’s existence into doubt. EURGBP has further upside potential from here  should our expectations of the UK aiming for an early GBP undershoot and EMU officials trying to support Italy’s PM Renzi as much as possible come to fruition.

*MS maintains a long EUR/GBP from June 24.  *This Trade is recorded and tracked in eFXplus Orders. 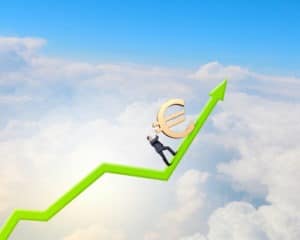 There are lots of worries in the old  continent and a bank run cannot be excluded.  However, there are reasons to be bullish on EUR/USD or at least not seeing it plunge. Here are two opinions: Here is their view, courtesy of eFXnews: EUR/USD Unlikely To Hit A New Cycle Low: Where To Target? - SocGen The post-referendum fall in sterling has been precipitous, but orderly.  The UK 10Y real yield currently matches the record lows reached in the spring of 2013. Interestingly, the nominal trade-weighted sterling is currently at levels prevailing in March 2013 too, with cable being much…