This was the week: Buy the dip mentality continues

The market mood swung from positive to negative and back to positive once again, all related to trade. There was no follow through on US President Donald Trump’s threat to slap tariffs on European cars. He was angered by Harley Davidson’s decision to move some production out of the US.

However, on the most critical front, with China, there was a relief of sorts. Trump decided not to use an outdated emergency law to curb Chinese investments in the US but leave it to the Committee on Foreign Investment in the United States (CIFUS). Delegating the job to a more cool-headed institution provided some relief to markets and diminished demand for the safe-haven yen.

Late in the week, reports that Trump wishes to take the US out of the World Trade Organization (WTO), somewhat weighed on the market mood. It is important to note that only Congress has the authority to make such a move.

US data has been mixed. Core durable goods orders came fell by 0.3%, below expectations, but significant upward revisions made the report look quite upbeat. US GDP was downgraded from .2.2% to 2% in the final read for Q1, but this came on top of rising prices.

In Japan, the Tokyo CPI report for June came out above expectations on all measures, with the all-important CPI ex Fresh Food accelerating to 0.7% YoY. Nevertheless, the outcome is still far from the 2% target the Bank of Japan has, and removing stimulus is not on the cards.

The first week of the month features a full buildup to the Non-Farm Payrolls. Monday’s ISM Manufacturing PMI will be eyed for the headline, which is expected to remain stable, and the Prices Paid component. The latter figure serves as another gauge of inflation and has been at sky-high levels in recent months, 79.5 in May.

Tuesday sees only Factory Orders, and Wednesday is the 4th of July, Independence Day in the US. Markets will be closed and this will affect liquidity and could cause some jitters in markets.

The holiday on Wednesday results in a busy schedule on Thursday. The ADP Non-Farm Payrolls provides insights into private sector employment, which has been stable of late. The ISM Non-Manufacturing PMI is projected to remain at robust levels. The score of 58.6 reflects strong growth in services sector, the largest in the US.

And just before the Non-Farm Payrolls, the Fed releases its meeting minutes from the June decision. The FOMC decided to raise rates and went further by signaling two additional ones. The message from Fed Chair Jerome Powell was crystal clear: the economy is doing very well. We will now get more information about the hawkish hike. The Minutes may reveal more about the members’ concerns about trade.

And Friday sees the all-important jobs report. Job growth is expected to stay in the vicinity of 200,000 after an impressive gain of 223,000 positions in May. Wages, which are no less critical, carry expectations for a repeat of last month’s numbers: 0.3% MoM and 2.7% YoY. If wage growth accelerates and nears 3%, the US Dollar could receive a big boost. 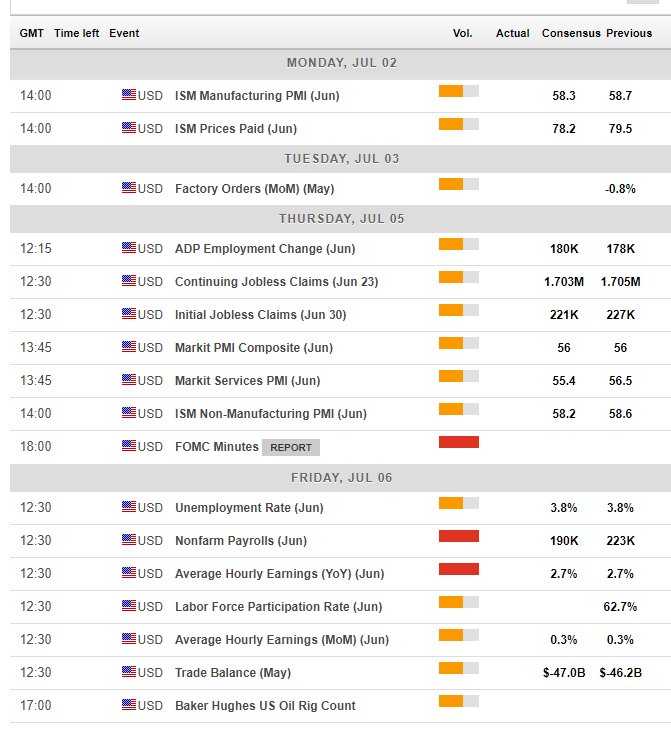 Japan publishes the Tankan outlook surveys early in the week with small drops expected in the primary indicators. This could move the Yen early in the week. Household spending, which fell last time, could also be of interest.

Yet, more importantly, the Yen’s sensitivity to trade concerns and the consequent moves remains a primary driver. Apart from Trump’s tweets, there is one date to keep an open eye for July 6th. This is when the US tariffs on China come into effect and it could trigger heightened market volatility. A last-minute deal to prevent the tariffs would cheer markets, but such a development is unlikely.

The USD/JPY is supported by uptrend support that represents higher lows. Also, the recent moves have pushed it above both the 50-day Simple Moving Average and the 200-day one. Momentum is positive, and the RSI is above 50 and below 70, indicating potential gains and the that the pair is still outside the overbought territory.

The FXStreet forex poll of experts shows a bullish sentiment for the upcoming week with a more nuanced approach moving forward to the monthly and quarterly scopes. Positioning has not changed that much since the last week. Caution seems to be the name of the game. 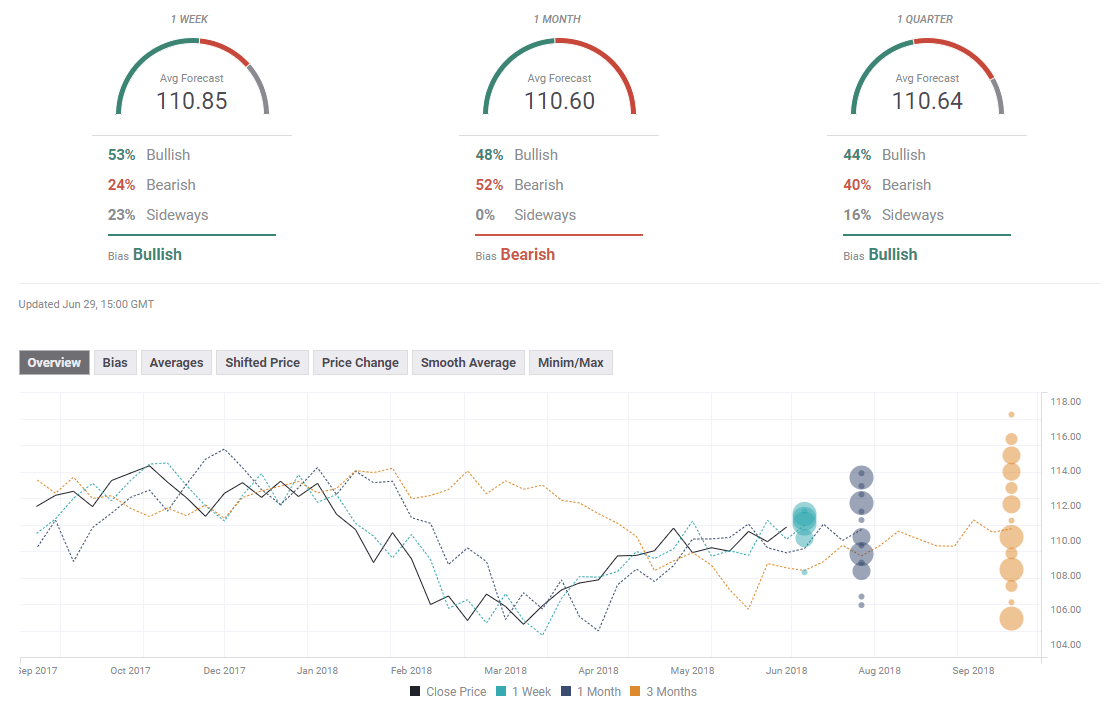 While the charts point to further upside gains, it is hard to see a sustainable increase unless Trump reverses his stance on trade. The new tariffs on China and the countermeasures will could trigger a more considerable reaction from markets, and the safe-haven Yen is ready to react. All in all, it is hard to see too much upside.