USD turned dramatically higher against major and minor currencies after the shift in stance on inflation by the Fed. The fallout from the Federal Open Market Committee (FOMC) meeting has reset the financial markets on a grand scale.

With the majority of FOMC members now expecting there to be at least two increases in interest rates before the end of 2023 and talk of starting to rein back its $120 billion a month asset purchases, the impact across all markets has been immense if not immediate.

And as far as asset purchase tapering went, Fed Chairman Jerome Powell made a pretty big hint, remarking: “You can think of this meeting that we had as the ‘talking about talking about’ meeting, if you’d like.”

From forex to equities – risk-off is back

Initially the stock market was fairly measured but by the end of the week the reflation trade was looking like it was on its last legs, if not entirely dead.

The Dow was down 1.6% and the UK FTSE 100 1.9% – both underperforming other stock indices because of their preponderance of value stocks.

Bond markets at the shorter end of the curve reacted with yields rising on Wednesday’s shift in policy from the FOMC.

The restrained nature of the bond selling at first gave the impression there would be no repeat of the panic-selling in the so-called taper tantrum of 2013 – the last time when the Fed hinted at a more hawkish posture on monetary policy.

But that didn’t last and on Thursday the bond markets saw buyers return and yields fall back. The 10-year Treasury   the most closely watched because of its influence on borrowing costs globally – 6 basis points to 1.51%, while the 30-year dropped 10 basis point to 2.1%.

However, at the shorter-end of the curve, the two-year maintained the upward momentum in yields, up 1 basis point to 0.21%.

In the currency markets the reaction was at its most severe.

The dollar index (DXY) made two large upward moves on Wednesday and Thursday of 0.6% and 0.86% respectively. That, taken together, was the largest move of the greenback against the other major internationally traded currencies this year. 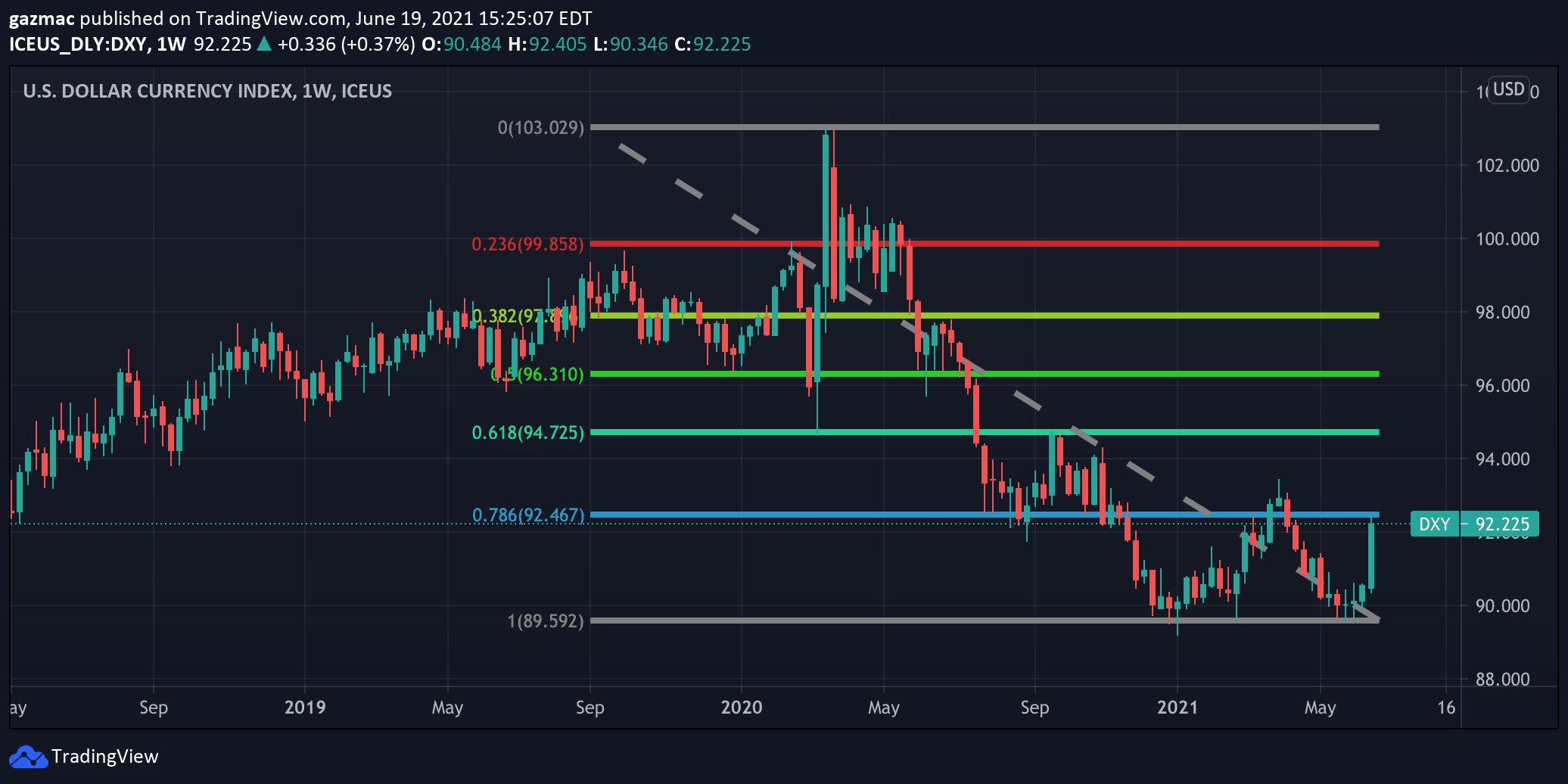 Both the euro and the pound lost ground to the dollar, but so too did a host of other countries’ currencies, notably in Asia.

Until this week the dollar had been weakening over the past 12 months, aside from some appreciation seen in March.

But the Fed’s definite move to indicate to markets that it was aware of inflation expectations rising and what this could be saying about an overheating economy, both at home and abroad.

The fact that the Fed has shifted from the assessment that the increase in inflation was transitory has signalled to the equities market that valuations are surely too rich, given the negative implications for future corporate earnings. Not surprisingly, then, US stocks has their worst week since November last year.

Commodities have also taken a hit from the stronger dollar. Those commodities priced in the USD become more expensive. For now oil is immune, and its price continues to benefit from the prospect of Iranian oil being kept off the market as the prospect of nuclear talks leading to the lifting of sanctions dissipates.

It was a different story for metals such as copper however, which gave up a lot of their most most recent gains. The decision of the Chinese government to release some of its strategic reserves in an attempt to put a lid on metal price inflation added to bearishness in commodity market.

But back with currencies, the most significant repercussions could be for the carry trade between emerging market currencies in the Far East and the dollar. The appreciation in the dollar squeezes the profit opportunities as the spread between the interest rates of, for example, the Korean Won (KRW) and the US dollar narrows.

KRW snapped a five-day winning run to see its biggest fall against the dollar since February. The Chinese Renminbi also dropped. The Japanese Yen was an exception, benefiting from its safe haven status.

With no major economic calendar events in the US, market participants will be on Fed watch.

On Friday St. Louis Federal Reserve President James Bullard told CNBC the economy was in a good place, but that came with a caveat.

Bullard went on to explain that he expects inflation to be 3% this year and falling to 2.5% in 2022 before it returns to the Fed’s 2% target. The Fed had previously said that it would be relaxed about inflation remaining above the target level, provided it wasn’t for an extended period.

Bullard added, though, that with inflation above target he thinks there should be an interest rate increase as early as next year.

Bullard is not currently a voting member of the FOMC, but he is next year.

It was only in March that the FOMC had said inflation would run at 2.2% this year – it has now revised that upwards to 3.0%.

The economy is also hotter than it had previously expected. It now expects the GDP to be 7.0%, not the 6.5% it pencilled a month ago. In December the FOMC though had GDP would be 4.2% this year.

If you are looking to profit from forex markets, then look out for our free forex signals next week. 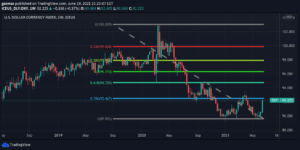 USD turned dramatically higher against major and minor currencies after the shift in stance on inflation by the Fed. The fallout from the Federal Open Market Committee (FOMC) meeting has reset the financial markets on a grand scale. With the majority of FOMC members now expecting there to be at least two increases in interest rates before the end of 2023 and talk of starting to rein back its $120 billion a month asset purchases, the impact across all markets has been immense if not immediate. And as far as asset purchase tapering went, Fed Chairman Jerome Powell made a…