The EUR/USD is trading around $1.2120, slightly lower on the day. US bonds, which did not trade in Asia due to holidays, are moving markets in the wake of the European session. The benchmark 10-year Treasury bond is up to 2.967% and the greenback is moving up with it.

On Friday, the US Dollar pared its gains from earlier in the week as yields dropped. This came despite a better-than-expected GDP report at 2.3% annualized. Profit taking and last minute jitters could be seen as the month draws about to end.

There is a lot of data to digest as well. Weak data continues weighing on the euro. German Retail Sales fell by 0.6%, far worse than a rise of 0.8% that was projected but with a silver lining of an upward revision. M3 Money Supply decelerated to 3.7% YoY, worse than 4.1% predicted. On the other hand, Private Loans are up 3% YoY, a tad over 2.9% that was on the cards.

The most substantial figure comes from Germany with the preliminary CPI read for April. Consumer prices in the largest economy are forecast to drop by 0.1% MoM after a rise of 0.4% in March. Year over year, CPI is estimated to have remained at 1.5%. It is important to note that the various German states report their preliminary figures throughout the European morning, reshaping expectations.

Inflation data is also due in the US. The Fed’s favorite inflation measure, the Core PCE Price Index, is projected to accelerate to 1.9% YoY in March after 1.6% beforehand. This would follow the lead from the Core CPI data already out earlier this month. Reaching the target of 2% would be significant for the Fed and the US Dollar.

These data figures provide a strong start to a busy week that also features the Fed decision, euro-zone inflation and GDP data, and the Non-Farm Payrolls with its full buildup. 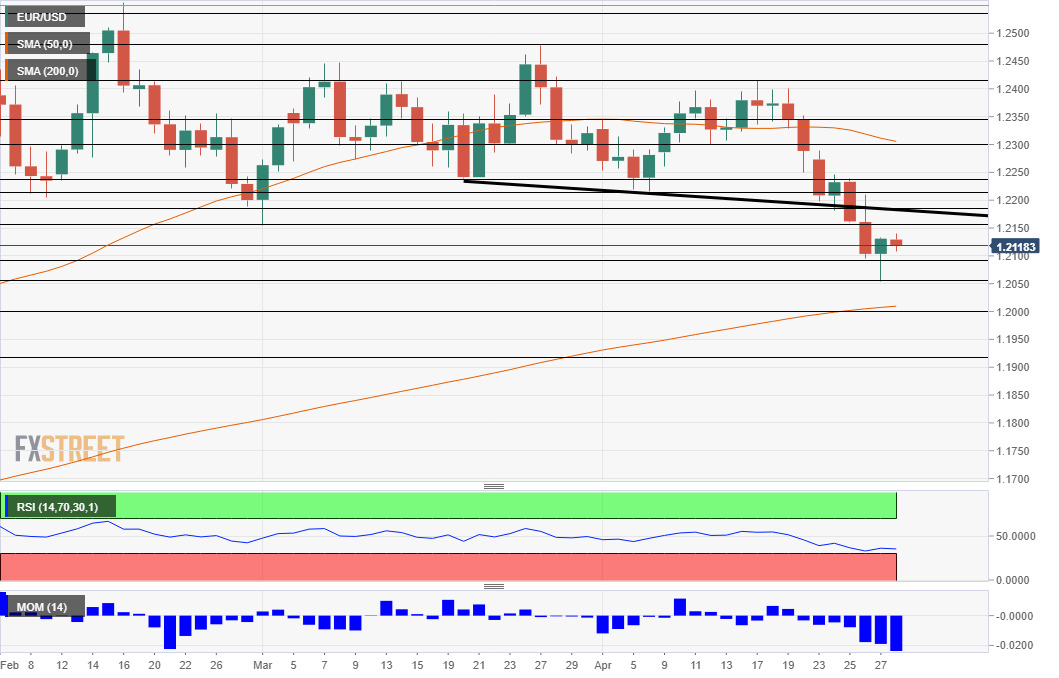 The EUR/USD remains under pressure. Momentum is to the downside and the RSI is well below the 50 level yet above 30, indicating further falls without getting into oversold territory. The break below downtrend support is also a bearish sign.