Did Leave or Remain win the European elections? While Nigel Farage’s Brexit Party has been the big winner with around a third of the votes, the trio of pro-Remain parties led by the Liberal Democrats has gained a similar share of the votes. Britain’s two main parties have been the clear losers – the ruling Conservatives for failing to deliver Brexit, and Labour for its ambiguity on a second referendum. The only certainty is Brits are growing more polarized over the UK’s exit from the EU.

GBP/USD initially advanced in reaction to the relatively strong showing of the pro-Remain parties, but the party was short-lived and the focus quickly returns to the leadership contest in the ruling Conservative Party. Three days after PM Theresa May announced her intention to step down, the election results may only increase the chances of a no deal Brexit. The defeat in the nationwide vote — the worst since the 19th century — may harden the position of the contenders to lead the party and the country.

Boris Johnson, the former foreign secretary, and the leading contender has somewhat softened his position over the weekend by saying that he would prefer to leave the EU with a deal. However, as more Conservative grandees and analysts frame the defeat on the lack of a clear commitment to Brexit, Johnson may harden his stance once again — adding pressure on the pound.

GBP/USD is also pulled down by a bit of USD strength. The greenback advances amid the ongoing dispute between the US and China around technology and trade. US President Donald Trump has said he sees a deal between the world’s largest economies at some point, but not now.

Low liquidity is due as both the UK and the US are on holiday today, implying low liquidity. Nevertheless, Trump’s comments on his visit to Japan and the political fallout of the EU elections continue producing headlines that may move the currency pair. 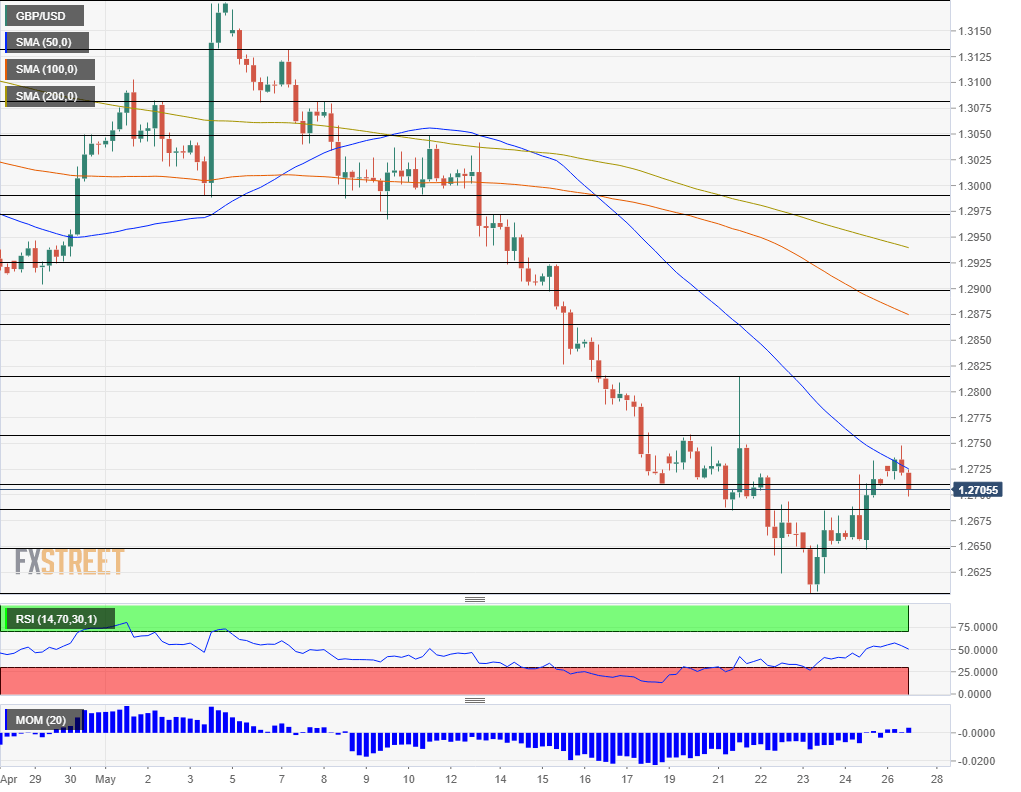 The four-hour chart shows that GBP/USD has failed to recapture the 50 Simple Moving Average, and the Relative Strength Index is moving down. Cable temporarily has failed in gaining upside momentum.

GBP/USD is struggling with the 1.2685 line which provided support early last week. The next level to watch is 1.2650 that was a stepping stone on the way up. The fresh four-month of low of 1.2605 is the next line to watch.

Some resistance awaits at 1.2710 that was a support line in mid-May. It is followed by 1.2750 which capped it earlier today and also two weeks ago.

Get the 5 most predictable currency pairs
Previous ArticleECB’s Hansson: Tiering ECB rate would risk overcomplicating policy
Next Article The three cryptos are ready for the next take-off