December is here and with it the expiration of the transition period at year-end. While turning the page into the last month of the year terminated technical flows into the dollar, the pound is under pressure as Brexit talks have yet to result in a deal.

GBP/USD temporarily surpassed 1.34 as the safe-haven greenback came under fresh pressure. Optimism about a COVID-19 vaccine returned after Moderan announced final upbeat results from its coronavirus vaccine and as regulators are set to approve an emergency use of the Pfizer/BioNTech jab.

The dollar is also on the back foot ahead of testimony from Jerome Powell, Chairman of the Federal Reserve. The world’s most powerful central banker expressed concern about the economic impact of the harsh winter wave of the virus in America. While his prepared remarks did not consist of any practical promises, he will likely be asked about extending the bond-buying scheme in the upcoming Fed meeting. Any clue about easing may further weigh on the dollar.

Yet as mentioned, the pound has been unable to fully capitalize on these developments. Brexit headlines remain contradictory, with several politicians saying an agreement can be reached this week while others casting doubts. Fisheries remain the main sticking point, but also rules related to state aid have yet to be finalized. It seems that both sides are waiting for the other to make the leap – offer a concession that would allow for a virtual handshake.

“Far away, so close” – remains the best definition of the state of talks that continue at full force in London. Any positive or adverse headline is set to rock sterling. The latest comment has come from Ursula von der Leyen, President of the European Commission, who said that the EU is preparing for a no-deal scenario.

In internal politics, Prime Minister Boris Johnson is set to pass his new localized restrictions scheme in parliament, yet face fiercer opposition. A growing group of right-wing rebels in his Conservative Party is set to vote against the new measures, showing that the PM’s large majority has its limits. The opposition Labour and SNP parties announced they will abstain. While few doubt a positive outcome, Johnson’s eroding support may hurt sterling in the future.

After Markit upgraded the UK’s MAnufacturing PMI to 55.6 points in November – reflecting robust growth – the focus shifts to the all-important ISM Manufacturing PMI. The forward-looking indicator is set to edge down from the highs, and continue pointing to growth. It serves as the first clue toward Friday’s Nonfarm Payrolls figures.

See US ISM Manufacturing PMI Preview: With a tablespoon of salt

Overall, Brexit remains in the spotlight, and the longer talks last, the more vulnerable the pound. Other factors are mostly favorable for cable. 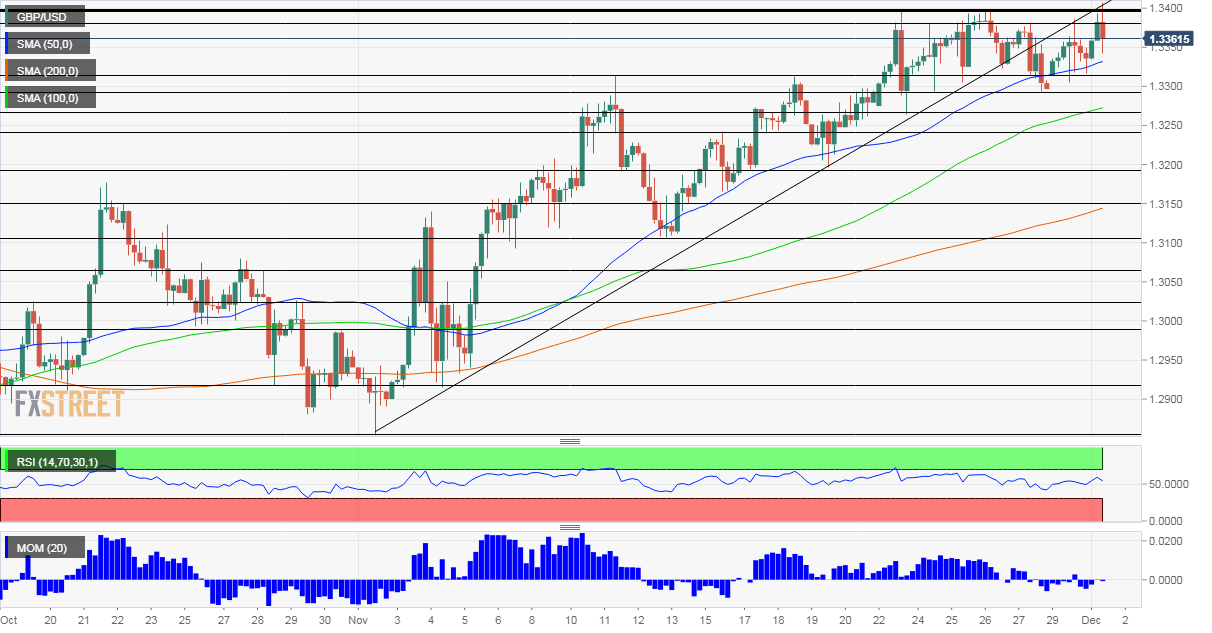 Pound/dollar has bounced off the 50 Simple Moving Average on the four-hour chart once again but has momentum is turning negative. The break above 1.34 proved short-lived. All in all, bulls have an advantage, but not a robust one, especially while GBP/USD trades below the broken uptrend support line that accompanied it.

Get the 5 most predictable currency pairs
Previous ArticleAlgeria Energy Minister: We are optimistic that will succeed together to reach consensus
Next Article Altcoin prices on the cusp of skyrocketing as they did in the last two bullish cycles