Can technicals defy fundamentals and pull cable back down? It seems that the answer is no, as the pound has plenty of reasons to rise while the dollar has reasons to tumble down.

The latest news from the UK has been upbeat – Britain’s Unemployment Rate dropped to 4.8% in March, beating estimates and showing that the economy was strong when the reopening was just in its infancy. The more recent Claimant Count Change for April also exceeded expectations by showing a fall of 15,100.

Several restrictions were loosened on Monday, amid fears that the variant first found in India is spreading fast. Nevertheless, new studies showed that existing vaccines cope with this new variant efficiently. The UK is well-advanced in immunizing its population, with 35-year olds now eligible for a jab.

Even the Brexit front has seen some upbeat developments – Britain made new offers to resolve trade issues with Northern Ireland.

On the other side of the pond, the dollar has been suffering from the Federal Reserve’s insistence that rising inflation is transitory. Fed Vice-Chair Richard Clarida clarified that this is the bank’s stance despite the bump up in the Consumer Price Index in April and the surge in inflation expectations reported by the University of Michigan’s Consumer Sentiment Index.

The Atlanta Fed President Raphael Bostic is set to speak later in the day. If he does not deviate from the bank’s current stance, it is hard to see the dollar recovering.

Close by in Washington, the White House will receive counter-proposals from Republicans, which will likely fall substantially short of President Joe Biden’s ambitions for a $4 trillion spend and tax package. Concerns of overheating are unlikely to arise from the GOP’s proposals.

Overall, GBP/USD has more reasons to rise than fall. 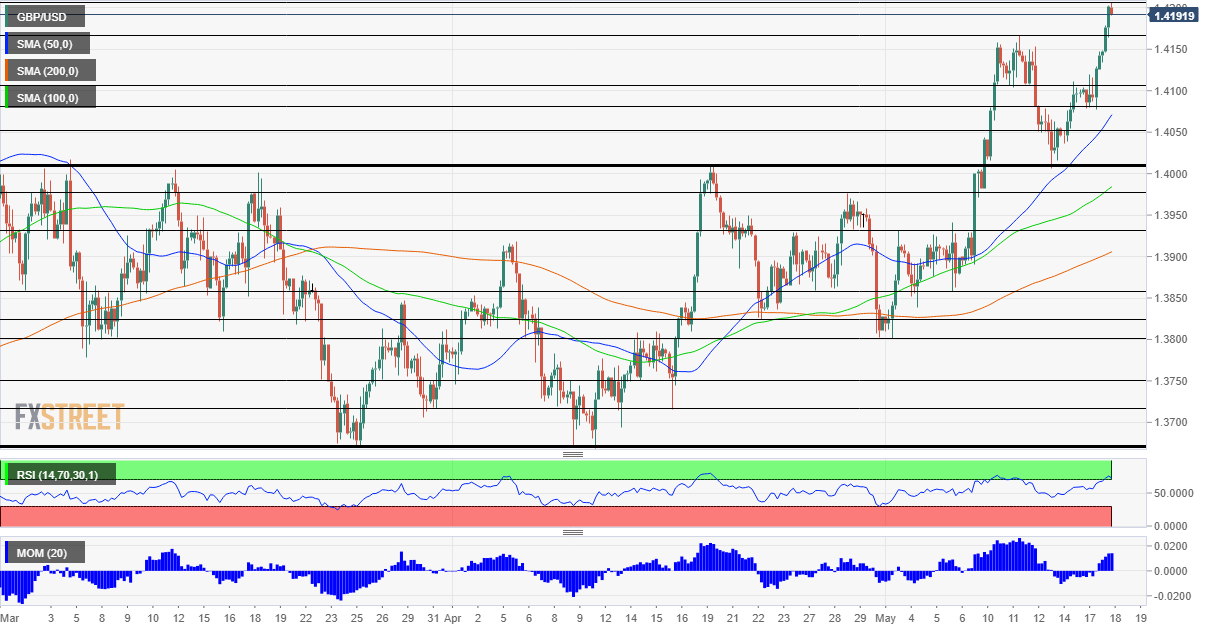 Pound/dollar has entered overbought territory according to the Relative Strength Index (RSI) on the four-hour chart. It has topped the 70 level. On the other hand, momentum is to the upside and the currency pair is also trading above the 50, 100 and 200 Simple Moving Averages.

Get the 5 most predictable currency pairs
Previous ArticleEUR/GBP to plummet towards 0.83 in the next 12 months – Danske Bank
Next Article Palladium and platinum better leveraged to recovery than gold – Deutsche Bank