Latest
You are at:Home»Forex News»GBP/USD set to benefit from UK reopening and global cooldown

Summer is here – officially there is a month left, but Brits are already taking advantage of the new regulations, which allow for foreign holidays in select countries. The latest round of easing has begun on Monday, and it also includes more leisure activities. Is it already priced into the pound?

Prime Minister Boris Johnson already announced these steps a week ago, but they were marred by concerns over the spread of the Indian variant. Reports about clusters of the contagious strain have weighed on sterling. Nevertheless, vaccines seem to cope with this mutation and Britain is already well advanced in its immunization efforts People aged 35 and older are eligible to receive the jab.

While the return to airports and pubs supports the pound, the dollar is facing fresh pressure. Last week, the greenback benefited from concerns about rising inflation, stemming from stronger than projected Consumer Price Index figures. The University of Michigan’s Consumer Sentiment report also added to fears, by including an increase in inflation estimates.

On the other hand, America’s economy is suffering from speed bumps – Retail Sales disappointed by remaining flat in April, and the Control Group surprisingly fell by 1.5% last month. The US is not alone. China, the world’s second-largest economy, reported an increase of only 17.7% YoY in consumption. While that figure looks large, it fell short of around 25% expected.

How high can inflation rise without robust Chinese expenditure? If the global economy does not overheat, there is no need for the Fed to taper down its bond buys, nor raise rates. Most Fed officials have been reiterating the position that inflation is transitory.

Can the Fed keep US rates in check?

Vice-Chair Richard Clarida and several of his colleagues will be speaking today. If they repeat the same message, the dollar could weaken.

Another source of worry comes from rising COVID-19 cases in Asia. Taiwan, the world’s largest producer of microchips, is suffering from a wave of infections, joining the ranks of Singapore, India, and other countries. While that may support the safe-haven dollar, it may convince the Fed to keep monetary policy highly accommodative. More dollars printed mean a weaker dollar.

Overall, there is more room to the upside than to the downside for cable. 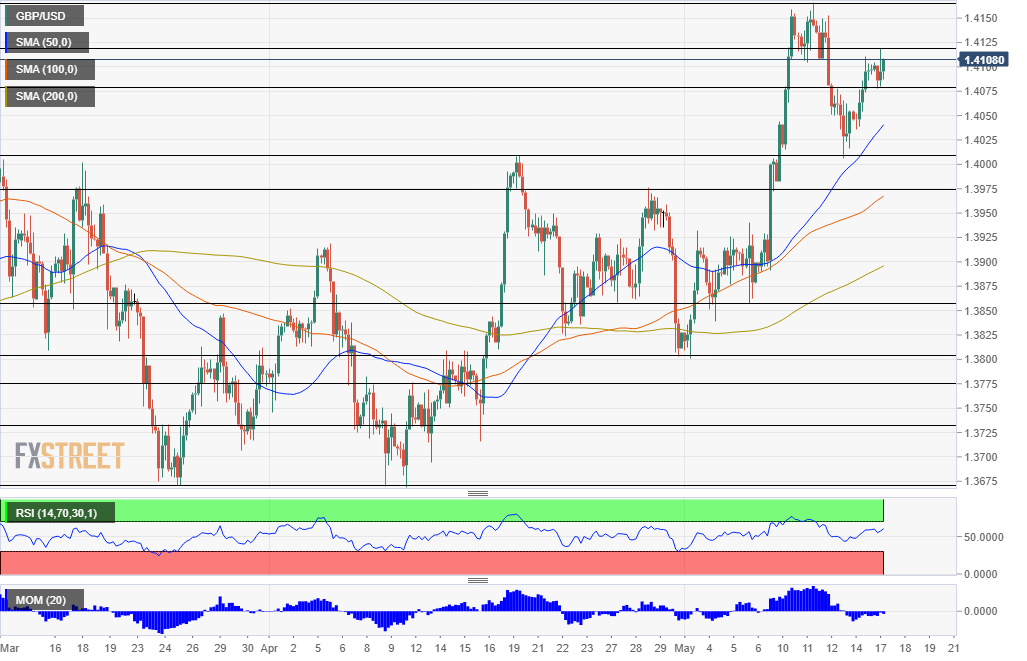 Pound/dollar is suffering from downside momentum on the four-hour chart but is trading above the 50, 100 and 200 Simple Moving Averages, a bullish sign. With the Relative Strength Index hovering outside overbought conditions, the upside looks more appealing.

Some support awaits GBP/USD at the daily low of 1.4080. It is followed by 1.410, which was a low point earlier this month and capped the pair earlier. Further down, 1.3975 awaits the pair.

GBP/USD Weekly Forecast: Cable ready for next climb, with help from UK data, the Fed