Latest
You are at:Home»Forex News»GBP/USD surging on the Boris boost, but it is already overbought

Boris is back to a double-digit lead in polls – and the pound likes it. The most recent batch of election surveys has shown a substantial increase in the ruling Conservative Party’s lead over opposition Labour. According to Britain Elects’ poll tracker, the Tories are set to be backed by 39.7% of voters, up 2.6 points. Labour is also up, but only by a meager 0.4 to 28.8. A 10-point should be sufficient for winning a majority in parliament.

Prime Minister Boris Johnson’s additional backing comes from former supporters of Nigel Farage’s Brexit Party. The candidates’ lists have revealed that 43 members of Farage’s right-wing outfit have opted out of running – joining 317 that the party had already withdrawn. Apart from helping the Conservatives win in these constituencies, the party’s climbdown also deters other voters from backing it.

Investors prefer an outright majority for the PM that would allow him to ratify the Brexit accord and also enact market-friendly policies. GBP/USD has kicked off the week with a Sunday gap and is gradually moving higher.

Johnson is addressing the Confederation of British Industry (CBI) and will try to woo businesses to rally behind him – offering tax cuts. Jeremy Corbyn and Jo Swinson, leaders of Labour the Liberal Democrats respectively, will also deliver speeches at the event. Markets are worried about Corbyn’s plans to nationalize several industries, including broadband.

With 24 days to go and a 24/7 news cycle, any new opinion poll or scandal may impact markets. While Johnson will likely be cheered by at the CBI event at the InterContinental London, he is under investigation in another part of town.

The London Assembly will dive deeper into his relationship with American businesswoman Jennifer Arcuri – whom he might have helped without as Mayor of London. He has reportedly failed to disclose the nature of their ties after he promised to do so after an affair with Helen Macintyre, who also bore his child.

Johnson has been avoiding questions about his colorful private life – including those about the number of children he has. So far, his ratings have been unhurt as voters focus on policies, but suspicions of wrongdoing

Across the Atlantic, high-level US-Sino talks have been labeled as “constructive,” keeping stock markets bid. However, it remains unclear if President Donald Trump is willing to remove the new tariffs the US intends to impose in December, or undo previous rounds. Investors await Trump’s tweets and commentary from Beijing. 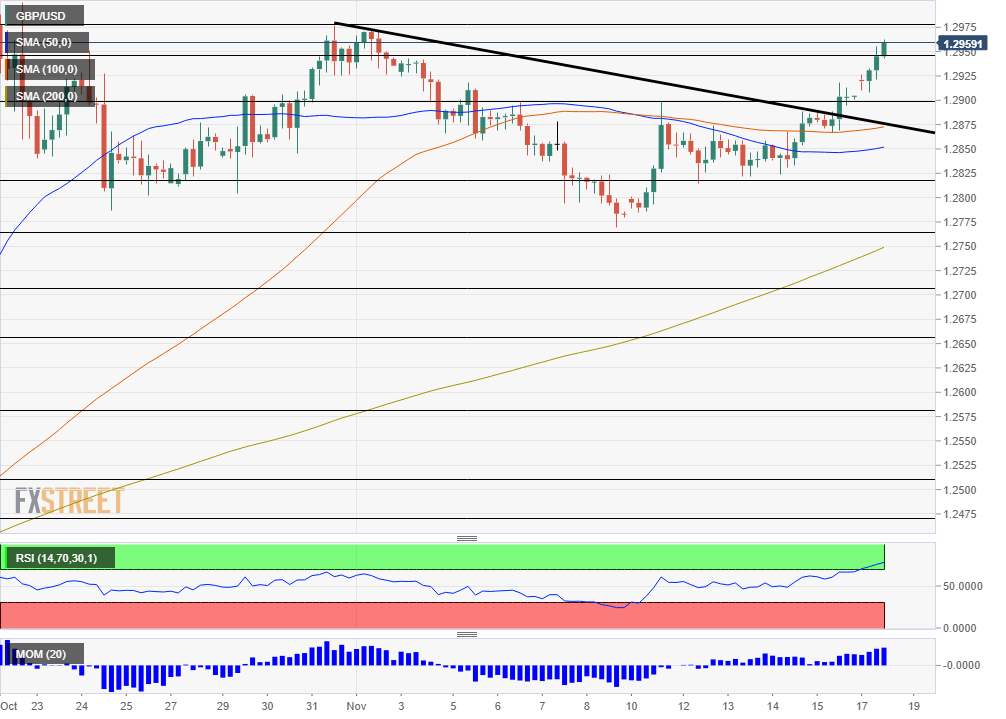 The Relative Strength Index on the four-hour chart is well above 70 – indicating overbought conditions. Will GBP/USD fall? Other indicators are positive – momentum is to the upside and sterling trades above the 50, 100, 200 Simple Moving Averages.

Overall, a downside correction may be expected, but GBP/USD still has room to extend its gains afterward.

Get the 5 most predictable currency pairs
Previous ArticleEUR/GBP drops to monthly lows near 0.8500
Next Article PBoC: Another rate cut – Deutsche Bank