Latest
You are at:Home»Forex News»GBP/USD well-positioned to pull up with Powell after Boris’ boost

Slow, but irreversible – that has been Prime Minister Boris Johnson’s message when presenting his lengthy reopening plan, and the GBP/USD may echo his words in ts upwards march. Cable is nearing 1.41 in a relentless rally.

While investors prefer a quicker return to normality – especially as COVID-19 statistics have been falling sharply – the government’s cautious four-month exit scheme has been well-received by markets, which seem convinced that the current lockdown is the last. Moreover, the program receives broad support from the public, the opposition, the medical community – and also from the Treasury, which is set to extend its furlough scheme.

The pound also received a boost from labor figures. While the Unemployment Rate rose to 5.1% in December, that met expectations. On the other hand, wage growth accelerates to 4.7% yearly and the more recent jobless claims figure dropped by 20,000 in January, exceeding estimates.

On the other side of the pond, US bonds received a fresh bid, lowering their yields and pushing the dollar down. Returns on ten-year Treasuries – the global benchmark – have fallen from the 1.40% level.

All eyes are now on Jerome Powell, Chair of the Federal Reserve, who testifies before Congress later in the day. Will the world’s most powerful central banker soothe markets by promising to do more? That would lower yields but could also trigger fears of inflation. On the other hand, Powell can afford to cheer the current comeback in yields – seen as a healthy sign of the return to normality – in fear of a market meltdown.

Back in 2013, the then-Chair of Ben Bernanke triggered a “taper tantrum” by hinting at reducing the Fed’s bond-buying scheme. Powell, then a Governor on the Fed’s board, has probably learned the lesson and will likely err on the side of keeping markets calm – even at the risk of rising inflation fears. With ten million people out of work in America, there is no time to lift the pedal from the metal.

Also on Capitol Hill, a House committee advanced President Joe Biden’s $1.9 trillion stimulus package toward a vote on the floor of the lower chamber later this week. While the Senate may water down the plan, Democrats seem keen on pushing it through. However, the focus on Tuesday is on Powell.

All in all, the sterling has reasons to rise and the dollar has pressure from Powell to fall. 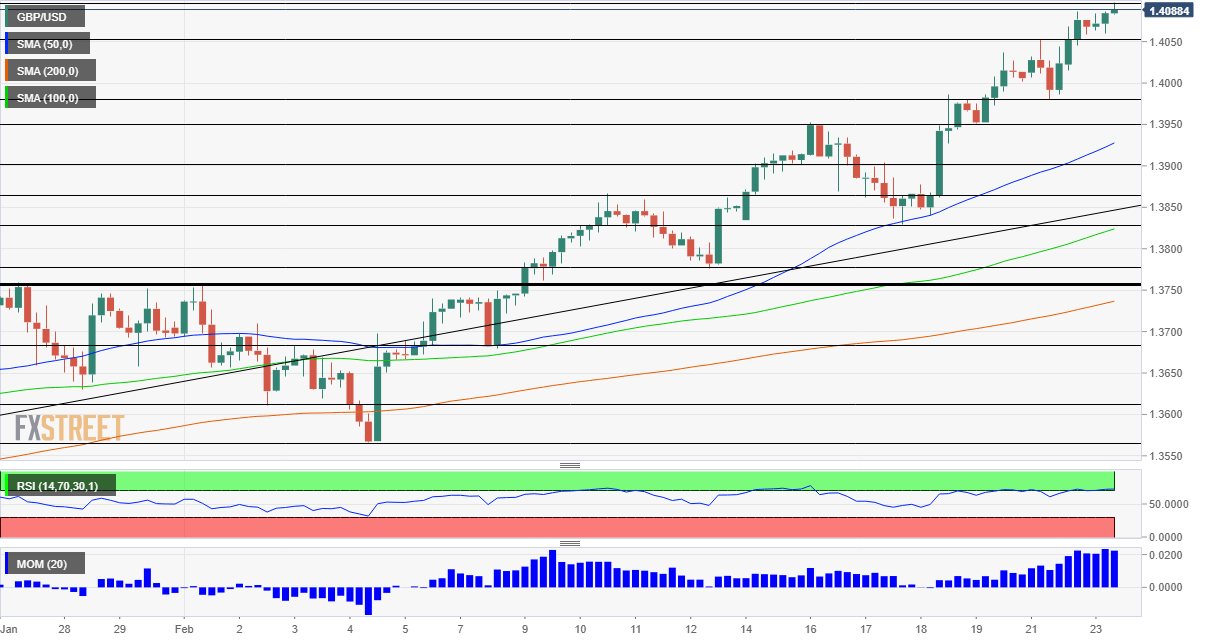 The Relative Strength Index is just above 70 – signaling moderate overbought conditions that imply a pause in the rally. However, a look at the recent past shows that the RSI can hold onto high ground for long periods. Other indicators are positive – momentum is to the upside and cable is above the 50, 100 and 200 Simple Moving Averages.