The upcoming week is packed with events, with PMI figures in the limelight. Here’s an outlook for the British events, and an updated technical analysis for GBP/USD. 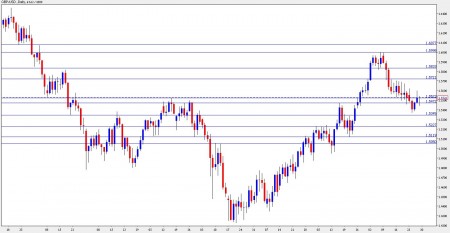 The Pound dived lower in the past week, but managed to recover, with a boost coming from an upwards revision of GDP for the second quarter. Will it continue higher?

The British Pound began the week with a significant downfall, first losing the 1.5520 line and quite quickly the 1.5470 line. Both were mentioned in last week’s outlook. The 1.5470 line turned into tough resistance. This was eventually broken, and the pair closed just above 1.5520, at 1.5536 – Another week of retreat for the Pound.

GBP/USD ranges between 1.5520, which served as tough resistance in April and as support line in February, to 1.5720, which supported the Pound back in 2009. It’s less strong than in previous weeks.

Looking up, 1.5833, which provided support when the year began and later worked as resistance, is the next line. Higher, the psychological round  number of 1.60 proved to be a tough barrier in recent weeks and is a strong resistance line.

Higher, 1.6080 is the next minor resistance line, after working as support in January. It’s followed by 1.6270, but that’s quite far at the moment.

Looking down below 1.5520, the next line of support is quite close – 1.5470 – it capped the pair just this week. 1.5350 served as pivotal line in March and April and this week’s attempt to break below it makes it strong again.

Below, 1.5230 was a stubborn resistance line in July and is now a major support line. Lower, 1.5120 will provide further support.

I remain bearish on the Pound.

Softer inflation, a new hesitation in job growth,makes the Pound vulnerable in the face of the imminent global slowdown.

The upcoming week is packed with events, with PMI figures in the limelight. Here's an outlook for the British events, and an updated technical analysis for GBP/USD. GBP/USD daily chart with support and resistance lines marked. Click to enlarge: The Pound dived lower in the past week, but managed to recover, with a boost coming from an upwards revision of GDP for the second quarter. Will it continue higher? Halifax HPI: Publication time unknown at the moment. This house price index, is one of the most accurate available, as it's based on internal data from HBOS, one of the biggest…