Latest
You are at:Home»Forex News»Three ways Powell could move EUR/USD

The wait and the frustrating range trading have almost come to an end. Jerome Powell, Chair of the Federal Reserve, will testify before the House Financial Services Committee – shedding some light on the next moves of the Fed.

Bond markets are pricing in a rate cut of 25 basis points at the end of the month – but are uncertain about the road ahead. Expectations for a double-dose cut of 50bp or a long cycle of cuts have been lowered after the US reported an impressive increase of 224,000 jobs in June. The Fed may be in no rush to slash rates if it sees an upbeat economy.

1) One cut: Markets expect Powell to confirm an “insurance cut” in July – a single reduction of rates to face global headwinds. The US dollar will likely shake on such a confirmation but a significant move is unlikely. This is the baseline scenario.

2) No cut: If the Fed Chair paints a rosy picture of the economy and refrains from committing to a cut, the greenback may soar and EUR/USD could plunge. Recent economic data and trade truce support such an approach.

3) More than one cut: And in case Powell expresses concern about trade and subdued inflation – opening the door to several cuts down the road – EUR/USD may jump on the dovish message. President Donald Trump has been intensifying his criticism on the central bank, calling it cut rates and saying “it does not know what it is doing.”

His prepared remarks are due out at 12:30 GMT and are set rock markets before he begins reading out his statement at 14:00 GMT. Representatives will then ask Powell questions in a lengthy session.

Later in the day, the central bank releases its meeting minutes from the June decision where the Fed first opened the door to reducing rates. While the document may seem stale in light of Powell’s testimony, it is essential to remember that it is redacted until the very last moment – with the Fed well-aware of markets’ sensitivity to every word coming out of the Washington-based institution.

On Thursday, Powell will face a Senate committee. While he will likely repeat his prepared statements, the questions – and the answers – will be different.

On the other side of the pond, European Central Bank officials have reiterated their concern about low inflation and growth ahead of the ECB’s decision on July 25th. The ECB may opt to act as soon as the upcoming meeting – ahead of the new economic forecasts due out in September.

US-Sino trade talks have resumed with a phone-call between the negotiating teams. Both sides have noted a “constructive” conversation without providing additional details.

Overall, the focus is on the Fed’s Powell. 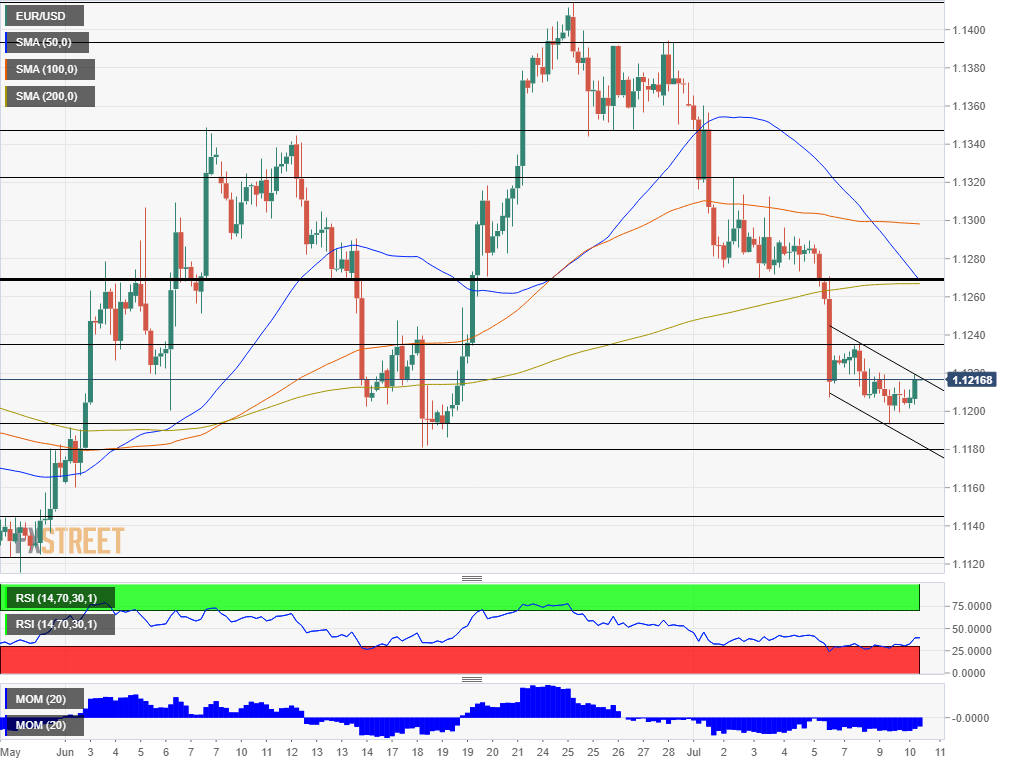 While EUR/USD is trading within a narrow range, we can see it is trading in a parallel downtrend channel. The Relative Strength Index on the four-hour chart has topped 30 – exiting oversold conditions – and opening the door to further falls. The pair remains depressed below the 50, 100, and 200 Simple Moving Averages.