Trichet has clearly softened his tone towards inflation and lowered official expectations for growth and inflation. His words are critical for the exchange rate of the euro  which is softening as well.

Trichet uses the code words “very closely monitoring”, but this relates to the overall situation and not only inflation.

The ECB just left the interest rate unchanged at 1.50%, exactly as expected.  This post will be updated frequently.

After the euro-zone has shown already many signs of slowdown both in economic growth and in inflation, Trichet is expected to soften his tone about inflation risks.

He might take a further step and hint about the end of the tightening cycle. The ECB hiked rates twice, in July and in April, looking only at inflation and disregarding the debt crisis and the risks of recession. In the ECB preview, I spoke about an option to cut the interest rate in the next meeting, the last for Trichet before Mario Draghi replaces him.

12:31 Press conference begins. Trichet says: inflation has remained elevated, and is expected to decline later on. Growth decelerated in Q2. We expect moderate growth due to high uncertainty.

12:33 Trichet says “monitoring very closely”, but the context is not inflation…

12:36 Ranges for GDP growth have been revised downwards.

12:36 There are downside risks. “A possibility of disorderly correction”.

12:38 Trichet concludes initial statement: There are risks due to  commodities, oil and no oil, taxes, growth is expected to be lower.

12:44 Wages should be adjusted and structural reforms should be made. More privatizations are needed to support competitiveness.

12:45 Questions begin: Are rate cuts coming? The decision was unanimous. The balance of risks of growth and inflation has changed – there are downside risks to growth. It was balanced beforehand and that is significant, according to Trichet. Inflation risks are balanced, and they were to the upside beforehand. These are the major things.

12:50 Trichet refuses to say anything specific about the question regarding rate cut.

12:51 Analysis of the situation has significantly changed.

12:55 Financing conditions are tighter in some areas of the euro-zone.

12:56 We are never pre-committed, taking all parameters that are at stake.

12:57 The July 21 decisions should be rapidly implemented. This is the working assumption. The EFSF should be up and running in order to intervene in the secondary markets.

12:58 “We have been exchanging views” with the SNB. It seems that he isn’t pleased by the decision. “The relationship is close”

13:00 Are you going to continue buying bonds? (Italian reporter). Answer: We never communicate it in the press conference.

13:01 Trichet repeats the information already known about bond buying. EUR/USD is higher at 1.3980.

13:03  The ECB staff makes projections. The baseline of the staff has been reduced substantially. We consider that growth risks are not balanced – there is downside risk. Uncertainty at a global level is very high.

13:04  Regarding to euro-zone exit: it is important to respect the euro-zone stability pact and honor the rules and other countries. “We have been preaching in the desert”. Benign neglect from everybody has been the norm. This is an accusation.

13:05 Trichet continues and relates to Greece, and says that the Greek government receives a strong message from the IMF and EU to fully respect the commitments. Is he opening the door for a Greek exit from the euro-zone? EUR/USD is drifting lower to 1.3970.

13:08 “We are a pillar of stability and confidence”

13:10 The crisis is not a one time event, but rather a phenomenon.

13:11 We cannot compare the yen and the franc. Switzerland is a strong economy, but relatively small, totally  surrounded  by the euro area.

13:14 “We were unanimous” on the decision. We changed the position. “I will not say anything else” regarding rate cuts.

13:15 “We stand ready to do what is necessary”. The situation is exceptional demanding.

13:16  Regarding Irish haircuts, nothing has changed. “When I look at Ireland, I see a country which is gaining credibility”

13:19  An Irish reporter confronts Trichet with a statement to impose haircuts on Anglo-Irish senior bondholders – a statement made by the Irish finance minister and by the IMF. Trichet said “credit worthiness” is important.

13:22 What about the D-mark? Trichet gets angry. “We have delivered price stability” also in Germany, 1.55%, which has been better than anything beforehand.

13:23 Also in the worst crisis since WWII, the ECB did things that were unpopular with governments. “It is not by chance that we have delivered price stability”.

13:24 Trichet reminds us that some governments asked to weaken the growth and stability pact.  “We do our job – not an easy job”.

13:26  “The weakest countries are asking us to deliver price stability. The independence of the ECB is inflexible. The ECB is “fiercely independent”.

13:30We are not negotiating with any government, just sending messages, then we see what happens.

13:33 Governments should be ahead of the curve. Structural reforms are necessary.

13:36 Why are there doubts about the banking system? A: 75% of financing is through banks. The Full Allotment is an important non-standard measure.

13:37 Banks should put aside their earning and reinforce themselves (recapitalize).

13:41 “I will not dramatize the situation” – the stress tests are important.

13:45 Governments must have the EFSF up and running. And then, the ECB will not need to buy bonds. The ECB buys bonds because the governments are moving slowly.

13:47 Spain must restore its credibility. Trichet refuses to say if the bond markets reflect the situation in Spain.

13:48 Was it necessary to raise the rates earlier in the year? Trichet defends those decisions, which have kept inflation very stable (but perhaps hurt growth?)

13:51 “We will examine the German court decision” and refuses to comment.

13:52 Regarding Italy, Trichet says that the ECB is not dictating, but just sending messages.

In the meantime, US jobless claims rose to 414K this week, a bit higher than 407K that was expected, and within range. American trade balance has shown a deficit of 44 billion, better than 50 billion that was predicted. 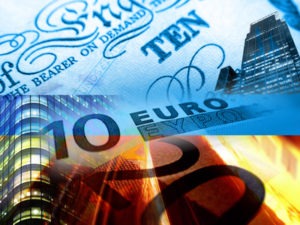 Trichet has clearly softened his tone towards inflation and lowered official expectations for growth and inflation. His words are critical for the exchange rate of the euro  which is softening as well.   EUR/USD fell below support at 1.4030 as Trichet began speaking softly. It is just under the round number of 1.40 and above support at 1.3950. Wrap up and forwards looking view available here. Trichet uses the code words "very closely monitoring", but this relates to the overall situation and not only inflation. The ECB just left the interest rate unchanged at 1.50%, exactly as expected.  This post…