Home » US existing home sales disappoint amid the “un-taper” trade

US existing home sales disappoint amid the “un-taper” trade

Softer than expected existing home sales out of the US re-ignited the “un-taper” trade yesterday and had equity markets print at fresh highs with the USD weakening across the board as the DXY sunk into the low 82s and closed at its lowest level in one month.

The positive investor optimism was bolstered throughout the overnight session, with Chinese Premier Li Keqiang stating 7% would be the bottom line for economic growth in the future, as China needs to achieve a moderately prosperous society by 2020.   The bullish comments came amid a report that China would look to invest in other industries such as high-speed railways in order to help reduce overcapacity in other sectors such as cement and steel.   The talk of a floor on Chinese growth moving forward helped propel the Hang Seng to a gain of 2.33%, while the Nikkei increased by 0.82%.   The yen weakened against the dollar as risk appetite picked up, with the USDJPY making another run to try and regain the 100 level.

Data flow is pretty quiet throughout Europe today, however the first full day for the royal baby is one that currently sees major equity bourses echoing investor confidence.   Upbeat forecasts from the Bank of France suggest the region was able to work its way out of recession and post GDP growth of 0.2% over the second quarter.   Joining in on the upward revisions, the Bank of Spain has released its estimates for Q2 growth, and peg only a 0.1% contraction in the last three months, a much smaller drop than the 0.5% that was recorded in the first quarter of the year.   The bank cites a stronger than expected export sector as the main driver behind the rosy forecasts, but we will get the official number next month to see if the recession from mid-2011 is still intact.   The Stoxx, FTSE, and Dax are all in the green at the time of writing, adding 0.59%, 0.30%, and 0.30% respectively.   The EUR is in a tug-of-war against the USD, with EURUSD pivoting in the high-1.31s and virtually unchanged so far on the session.

Tier one North American economic data today is larger Loonie centric, with retail sales for the month of May hitting the wires earlier this morning.   After a few months of worse than expected numbers, the headline reading was forecast to increase by 0.4% from April, but came in with a spike of 1.9% as higher sales were reported in 9 of the 11 subsectors.   The 1.9% monthly increase was the fastest rate of growth since March of 2010, and even when stripping out the more volatile reading of automobiles, core retails sales still increased by 1.2% over the moth of May.   Adding to the positive news, the volume of sales corresponded with the overall increase, suggesting organic demand from the consumer and not just a better than expected release driven higher because of price increases.   Sales at food and beverage stores were one of the main contributors behind motor vehicle and parts dealers, rising 1.1% to coincide with a later start to the NHL playoffs.   The Loonie jumped on the better than expected numbers, pressuring the USDCAD pair to test the 1.0300 level.   If USDCAD bulls fail to defend the 1.0320 over today’s trading, the technical tone increases the possibility for further losses for USDCAD into the mid-1.02s.

North American equity futures are grinding higher this morning, with the optimistic growth plans out of China ameliorating risk appetite.   S&P futures are suggesting the bulls will have a handle on things when the opening bell rings, looking to try and make a run at the 1,700 level.   Front month crude is experiencing a slight weight this morning, edging into the low $106/barrel region, while Gold also gives back some of its recent gains to change hands at $1,330/ounce.

Overnight there are a few releases that have the potential to affect the Loonie and overall investor risk appetite.    Australian USDCAD  numbers will be released tonight, with expectations that consumer prices increased by 0.5% from the previous quarter.   AUDUSD has experienced a nice bounce back into the mid-92s since the middle of July when Bernanke began to downplay the market’s expectations for the tightening of US monetary policy, and the minutes from the last RBA meeting were interpreted a little less dovish than originally expected.   Should the inflation numbers come in weaker than what analysts are forecasting, this would increase the likelihood another rate cut could be on the horizon, and would weigh on the Aussie along with other commodity-linked currencies like the CAD and NZD.

Another potential driver of risk appetite and the outlook for global growth, the HSBC Flash Manufacturing PMI reading for China is also due this evening.   Expectations are that the contraction in the manufacturing sector slows during July, with the 48.2 registered in June increasing slightly to 48.6.   Although nothing to write home about, should the reading come in on par with forecasts, it will get the survey off its lowest level since September of 2012.   A better than expected reading would compound the optimism we’ve seen after Keqiang comment’s last night, and bolster demand for the Loonie and other high-yielding assets on better prospects for global growth. 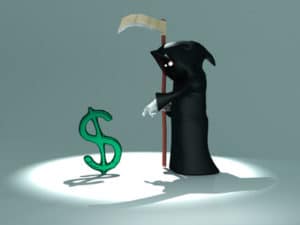 EUR/USD squeezed in a triangle – which direction will it

Softer than expected existing home sales out of the US re-ignited the "un-taper" trade yesterday and had equity markets print at fresh highs with the USD weakening across the board as the DXY sunk into the low 82s and closed at its lowest level in one month. The positive investor optimism was bolstered throughout the overnight session, with Chinese Premier Li Keqiang stating 7% would be the bottom line for economic growth in the future, as China needs to achieve a moderately prosperous society by 2020.   The bullish comments came amid a report that China would look to invest…