Last week the Bank of Canada members left the interest rate unchanged at 1% confident in the current market situation but worried about possible downside risks from the European continent. Ivey PMI jumped in October to 59.9 after dropping to54.4 in September indicating improvement in the Canadian economy. WillCanada be able to avoid the harsh impact of the European debt crisis?

Updates: Trouble in the euro-zone helps the greenback and USD/CAD is challenging the 1.0263 line once again. The pair couldn’t hold on to the 1.0263 line. The relief from Europe (especially from Spain), put the place at a lower spot. Canada’s southern neighbor, the US, has a rate decision, but Bernanke isn’t predicted to make changes. No QE means lower commodity prices and a weaker Canadian dollar. Bernanke’s move sent USD/CAD above resistance at 1.03. 1.0360 caps the pair that is now in the 1.03-1.0360 range, following more bad news from Italy. The Canadian dollar retreated with other commodity currencies on the drop in Europe. USD/CAD reached 1.0420. The good US figures and a good Spanish auction helped the pair drop back to the 1.03 – 1.0360 range. 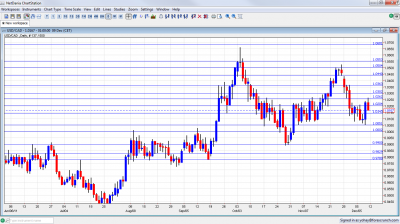 1.0677 is a strong resistance line that accompanies the pair for a long time. It worked well during October and also in the past, and remains of high importance.  1.0550 is a minor line on the way up – a line which can slow the pair.

1.0500 is another minor line of resistance. It was a  pivotal around the same time and was a  point  of resistance before the pair fell. 1.0430 provided support when the pair was trading at higher ground during November.

1.0360 capped the pair in September and October and also provided support. The round number of 1.03 was the peak of a move upwards seen in November and is weaker now.

1.0263 is the peak of recent surges during October, November and December, and has a stronger role after capping an attempt to rise. The round figure of 1.02 was a cushion when the pair dropped in November, and also the 2009 trough. This is a pivotal line once again.

On the domestic level, Ivey PMI provides hope but the  disappointing job report  balances it. Canada’s biggest neighbor and important trade partner, the US,  continues showing positive signs, but Europe is still unable to resolve the crisis, and this counters the US optimism. Oil prices, which remain high, push the loonie higher, but if these climb on an eruption of violence around Iran, global fear could drive funds to the safety of the US dollar. So all in all, the picture is mixed.

The  Canadian dollar  kept its balance against the greenback. How will Mid-east tensions move the pair?  Leading Index and Foreign Securities Purchases are the major events this week. Here's an  outlook  for the Canadian events and an updated technical analysis for the Canadian dollar. Last week the Bank of Canada members left the interest rate unchanged at 1% confident in the current market situation but worried about possible downside risks from the European continent. Ivey PMI jumped in October to 59.9 after dropping to54.4 in September indicating improvement in the Canadian economy. WillCanada be able to avoid the harsh impact…