Last week positive readings were released with surprisingly elevated reading for the Canadian  Ivey Purchasing Managers Index (PMI) rising to 64.1 from63.5 in December suggesting a major improvement in the market’s future activity and better than expected housing data with a boost of 11.1% in the Canadian building permits, highest jump since June 2007. Is Canada on a strong recovery path?  Let’s Start:

Updates: An attack against an Israeli target in Delhi sent oil prices higher and helped the loonie. USD/CAD is under parity once again. Also the news about the  Greek austerity approval  helped the risk sentiment.Doubts about Greece limit any Canadian advance. The pair struggles around parity. Higher tensions between Iran and Israel keep oil prices high and USD/CAD managed to fall and get away from parity. USD/CAD parity is seen below once again. The troubles in Greece, with less dovish sentiment from the Fed in the US, strengthen the US dollar. The weaker than expected Canadian  Manufacturing Sales and  Foreign Securities Purchases don’t help either. The see-saw continues – Dollar/CAD is under parity thanks to the  upcoming deal for Greece. Also the stronger than expected inflation in Canada helps the loonie. 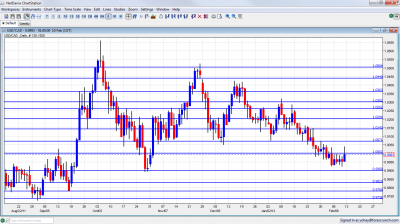 Dollar/CAD was trading under parity throughout most of the week. It made a break in the last hours of trading, but eventually fell under this line.

We start from higher ground than last week. 1.0550 was a minor cap back in September, when the pair traded higher. The round number of 1.05 had the same role during a  surge  in November.

1.0440 provided support when the pair was trading at higher ground during November and was tested successfully also in December, making it stronger.  1.0360 capped the pair in September and October and also provided support. It is weaker now.

The round number of 1.03 was the peak of a move upwards seen in November 2010 and has found new strength after working as a cap in January 2012. 1.0263 is the peak of surges during October, November and December, but was shattered after the move higher. The break above this line proved to be short lived, and it returned to the previous strength.

The round figure of 1.02 was a cushion when the pair dropped in November, and also the 2009 trough. It is weaker now but remains pivotal.  1.0143 was a swing low in September and worked as resistance several times afterwards. It is a strong line of resistance and should be watched on every move higher. The failure to break it marked the collapse of the pair.

1.0070 was a trough more than once in November, December and January. It worked as a very strong cap also in February 2012.  The very round number of USD/CAD parity is a clear line of course, and was a line of battle that eventually saw the pair fall lower.

Under parity,  the round number of 0.99 provided support on a fall during October and also served as resistance back in June. In February 2012, the pair fell short of challenging it. 0.9830 provided support for the pair during September and is a minor line on the way down.

Global slowdown, as seen in China, weakens the Canadian dollar. In addition, the fear of a housing bubble and weak domestic job figures also weigh on the loonie. On the other hand, recent US data was positive, and Canada depends a lot on the US. The chances of QE3 are still with us, and this weakens the greenback. All in all, the picture is balanced.

The Canadian dollar retreated after 4 weeks of gains, but USD/CAD managed to stay below parity. Inflation data is the highlight of this week. Here's an  outlook  for the Canadian events and an updated technical analysis for the Canadian dollar. Last week positive readings were released with surprisingly elevated reading for the Canadian  Ivey Purchasing Managers Index (PMI) rising to 64.1 from63.5 in December suggesting a major improvement in the market's future activity and better than expected housing data with a boost of 11.1% in the Canadian building permits, highest jump since June 2007. Is Canada on a strong recovery…