Last week Canada’s inflation gauge edged up unexpectedly in January where CPI rose 0.4% after a 0.6% drop in the previous month and Core CPI gained 0.2% following a 0.5% slide in December. Leading Index also came out better with 0.7% increase while expected to climb 0.6%. Let’s see what is in store for us this week.

Updates: USD/CAD enjoyed the higher tensions between the EU and Iran regarding oil trade and kicked off the week with a gap. However, it didn’t manage to break under 0.99, especially as worries about the Greek deal rose. Oil prices continue rising. Nevertheless, this could backfire on the US economy and indirectly on the Canadian one. USD/CAD is capped under parity. Parity couldn’t be conquered as global optimism weakened the US dollar.

USD/CAD  daily graph with support and resistance lines on it. Click to enlarge: 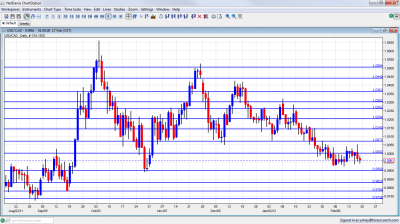 Dollar/CAD had an extremely choppy week. Parity was the battleground for most of the week, that ended in a victory for the loonie.

Most lines haven’t changed since last week. 1.0550 was a minor cap back in September, when the pair traded higher. The round number of 1.05 had the same role during a  surge  in November.

1.0440 provided support when the pair was trading at higher ground during November and was tested successfully also in December, making it stronger.  1.0360 capped the pair in September and October and also provided support. It is weaker now.

The round number of 1.03 was the peak of a move upwards seen in November 2010 and has found new strength after working as a cap in January 2012. 1.0263 is the peak of surges during October, November and December, but was shattered after the move higher. The break above this line proved to be short lived, and it returned to the previous strength.

The round figure of 1.02 was a cushion when the pair dropped in November, and also the 2009 trough. It is weaker now but remains pivotal.  1.0143 was a swing low in September and worked as resistance several times afterwards. It is a strong line of resistance and should be watched on every move higher. The failure to break it marked the collapse of the pair.

1.0070 was a trough more than once in November, December and January. It worked as a very strong cap also in February 2012.

The very round number of USD/CAD parity is a clear line of course, and was a line of battle that eventually saw the pair fall lower.

Under parity,  the round number of 0.99 provided support on a fall during October and also served as resistance back in June. In February 2012, the pair fell short of challenging it. 0.9830 provided support for the pair during September and is a minor line on the way down.

The new tensions between Israel and Iran support higher oil prices and this helps the Canadian dollar. Also improved US figures aid the loonie. On the other hand, the crisis in Europe strengthens the greenback. Retail sales should be watched this week.

The Canadian dollar made small gains against the US dollar in a choppy week and managed to reconquer parity. Retail sales figures are the highlight of this week. Here's an  outlook  for the Canadian events and an updated technical analysis for the Canadian dollar. Last week Canada's inflation gauge edged up unexpectedly in January where CPI rose 0.4% after a 0.6% drop in the previous month and Core CPI gained 0.2% following a 0.5% slide in December. Leading Index also came out better with 0.7% increase while expected to climb 0.6%. Let's see what is in store for us this…