The loonie  enjoyed some gains against the greenback, but these eventually met a wall.  The rate decision and inflation data are the main events this week. Here’s an  outlook  for the Canadian events and an updated technical analysis for USD/CAD.

Updates: The report about the US trying to stop Israel from attacking Iran continues to push oil high, and USD/CAD lower. The pair is struggling with the 1.02 line. The Bank of Canada leaves interest rates unchanged, as expected. After dropping below the 1.0143 line on Saudi Arabia’s $100 oil target and strong Chinese GDP, the pair is struggling with this line again. USD/CAD dropped under 1.0143 once again. Will it succeed this time? The BOC report is closely watched. USD/CAD parity is getting closer as  European optimism  pushes the dollar lower. 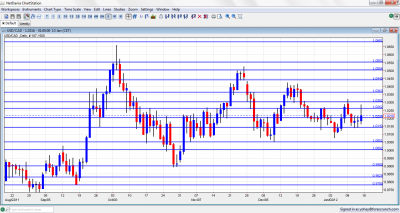 Dollar/CAD kicked off the week with a nice slide downwards, until it met the 1.0143 line (mentioned last week). This line served as a double bottom, and the pair eventually bounced higher and closed at 1.0216.

1.0677 is a long standing resistance line, tested several times in the past. 1.0550 is a minor line on the way up – a line which can slow the pair.  1.0500 is another minor line of resistance. It was a  pivotal around the same time and was a  point  of resistance before the pair fell.

1.0430 provided support when the pair was trading at higher ground during November and was tested successfully also in December, making it stronger.  1.0360 capped the pair in September and October and also provided support. It is weaker now.

The round number of 1.03 was the peak of a move upwards seen in November 2010 and has found new strength after working as a cap in January 2011. It is key resistance now. 1.0263 is the peak of surges during October, November and December, but was shattered after the move higher. The break above this line still needs to be confirmed.

The round figure of 1.02 was a cushion when the pair dropped in November, and also the 2009 trough. It is weaker now but remains pivotal.  1.0143 was a swing low in September and worked as resistance in the past. It capped a small recovery attempt in November.

1.0050 worked as support in November, was a swing low in December and had the opposite role back in 2010. It worked as a great cushion for the pair in November.

The situation in Europe is deteriorating at a faster pace, and this certainly helps the US dollar. Also fresh worrying American signs have a weakening effect on the Canadian dollar. Another external influence is the tensions around Iran, tensions which push oil prices higher together with the loonie. But all in all, the Canadian dollar is under pressure. In Canada, the rate decision will like send a concerned message.

The loonie  enjoyed some gains against the greenback, but these eventually met a wall.  The rate decision and inflation data are the main events this week. Here's an  outlook  for the Canadian events and an updated technical analysis for USD/CAD. Last week, positive housing data with new housing starts increasing unexpectedly to 200,200 units in December from 186,000 inthe previous month with a rise in multiple urban starts. Meantime new housing price index also increased above predictions gaining 0.3%. However the total value of building permits dropped by 3.6%, mostly inOntario. Will the housing sector continue to thrive ? Updates:…