EUR/USD had a bad week, losing ground after losing the range. The re-election of Obama combined with no little progress on Greece sent the pair lower. German ZEW Economic Sentiment, and the initial GDP readings for Q3 are the highlights of this week. Here is an outlook on the highlights for this week and updated technical analysis for EUR/USD, now at lower ground.

The Greek parliament approved the austerity measures required for another round of bailout funds, but these aren’t guaranteed yet. Is the country closer to leaving the euro, or will its upcoming bond payment at the end of this week, be taken care of?  The European Central Bank kept rates at 0.75%  and warned about the economic situation. More importantly, Draghi practically said that the crisis is reaching Germany. Indeed, German exports plunged to the lowest level since December, amid low demand from the EU and global markets. In the US, Obama’s re-election ignited fears of a less-than-perfect resolution of the looming fiscal cliff and caused a rise in the dollar and a sell-off of stocks. This theme could somehow be resolved at the last moment.

Updates: The EuroGroup continues to meet in Brussels.  The finance ministers failed to reach an agreement on  further aid to Greece, but agreed to give Greece a two-year extension, until 2016, to reduce its deficit to 2% of GDP. The EuroGroup also decided to postpone a decision on the next tranche of aid until November 20.   French Prelim Non-Farm Payrolls   fell 0.3%, just below the estimate of 0.2%. German ZEW Economic Sentiment dropped -15.7 points, well   below the forecast of -9.9 points. The Euro-zone Economic Sentiment also was a disappointment, as the indicator fell 2.6 points. The estimate stood at 0.2. The euro dropped below the 1.27 line, but has since improved. EUR/USD was trading at 1.2710.   French CPI rose a modest 0.2%, matching the estimate. Euro-zone Industrial Production was very sluggish, declining 2.5%. The estimate stood at -1.6%. This was the indicator’s sharpest drop since March  2009. The Italian 10-year Bond Auction saw yields drop slightly, with an average yield of 4.81%.   The previous average yield was 4.92%. Euro-zone GDP data was better than expected. French Preliminary GDP rose 0.2%, beating the estimate of 0.0%. GermanPreliminary GDP also rose 0.2%, just above the forecast of 0.1%. The ECB released its Monthly Bulletin.  Italian Preliminary GDP dropped 0.2%, but this was better than the estimate of -0.4%. Euro-zone CPI jumped 2.5%, matching the market forecast. Euro-zone CPI climbed 1.5%, also matching the estimate. Euro-zone Flash GDP dropped 0.1%, just above the estimate of -0.2%. EUR/USD is steady, as the pair was trading at 1.2755. 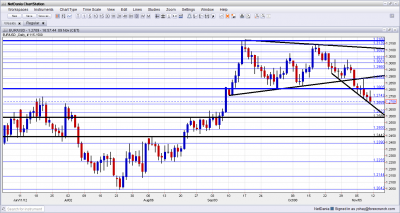 â‚¬/$ began the week on a weak note, falling below the wide range and losing the 1.28 line (mentioned last week). It then continued gradually lower, losing also the 1.27 handle. Here is a guide to the breakdown.

We start from lower ground this time. 1.3170 worked very well as a double top during September 2012 and is now the top frontier of the range. A failure to get closer to this line shows that the pair has limited momentum. 1.3140 was the high of October and is minor resistance before 1.3170.

1.3080 capped the pair in September and then again in October. 1.3030 provided some support at the same period of time. Both are minor in comparison with the next line.

The very round 1.30 line was a tough line of resistance for the September rally. In addition to being a round number, it also served as strong support. It recently worked as a battleground and the pair is now well below this line. It is closely followed by 1.2960 which provided some support at the beginning of the year and also in September and October – the line is weaker now.

1.2880 provided some support in October and now switches to resistance. It proved to be a backstop on the initial false rally after Obama’s victory. 1.28 is the bottom border of the range, and was eventually left behind. The pair fell to this low in September and later got close to it.

1.2750 capped the pair after the Greek elections and also had a similar role in the past. It is weaker now.  1.2690 was the new low after the November breakdown, and will be closely watched.

Below, the round number of 1.25 is not only of high psychological significance (USDEUR 0.80) but also worked as support during the summer of 2012. 1.2440 is already a stronger line, that was a clear separator during August.

The clear break of the narrowing channel to the downside, led to a continued downfall. We can now begin seeing the pair trading along downtrend support, that began in mid-October.

I turn from bearish to neutral on EUR/USD

This change in sentiment is based on a potential can kicking exercise for Greece that could stabilize the situation and allow the pair to consolidate after the recent losses. There is already a model for this: the revolving doors move in August. In the US, markets could also begin changing the sentiment towards the fiscal cliff, at least for now, while there’s still time for some kind of compromise.

However, regarding Greece, things could also go wrong, very wrong. Now that the US elections are over and the “end of the autumn” is here, we cannot rule out Greece will exit the euro-zone. For how long can leaders extend and pretend? At this time, everybody knows that Greece will need more debt restructuring, something that could be impossible for Germany to do. In addition, European leaders now know who is in the White House – with whom to coordinate a potential Grexit. In such a case, EUR/USD could fall like a rock.

EUR/USD had a bad week, losing ground after losing the range. The re-election of Obama combined with no little progress on Greece sent the pair lower. German ZEW Economic Sentiment, and the initial GDP readings for Q3 are the highlights of this week. Here is an outlook on the highlights for this week and updated technical analysis for EUR/USD, now at lower ground. The Greek parliament approved the austerity measures required for another round of bailout funds, but these aren't guaranteed yet. Is the country closer to leaving the euro, or will its upcoming bond payment at the end of…