EUR/USD enjoyed hopes for progress in the debt crisis and advanced within its range. With no real breakthroughs, the pair didn’t break critical resistance. Is it set to fall now? Public appearances by Mario Draghi,  German Ifo Business Climate and the forward looking Flash PMI’s are the main events . Here is an outlook for the upcoming events and an updated technical analysis for EUR/USD.

The EU Summit didn’t make progress on debt crisis issues: No announcement about a fresh cash disbursement was made. Also regarding Spain, the lack of progress with a banking union probably didn’t help Spain make a decision about a bailout. In addition,  Spain successfully sold  government bonds with a 10 year, 3 year and 4 year maturity, exceeding its auction targets. The 10-year benchmark bond bailout reached 5.458%, lower than the 5.666% seen in the previous auction. So, a bailout request would help the euro, but Spain is not certain it really needs external aid.

Update: There is a report about a new buy back scheme in which Greek debt would be reduced rapidly. This could improve market mood and lift the euro. Update 2:  Spanish Regional Elections: Rajoy’s PP Wins in Galicia, Nationalistic Parties win Basque Country. The Moody’s credit rating agency downgraded five regions in Spain, including Catalonia.  Just last week, Moody’s surprised the markets by maintaining the central government’s credit rating. EUR/USD is down on ther news, as the pair  has dipped below 1.30. EUR/USD was trading at 1.2999.   There are reports of a leaked draft agreement between Greece and the troika. According to the agreement, there would be an extension of two more years to reach a primary surplus, which would likely be 4.5% of Greece’s GDP. In return, Greece is to continue implementing structural reforms, including raising the retirement age from 65 to 67. Euro-zone and German PMIs were a major disappointment, falling below the market estimates. German Ifo Business Climate also failed to meet the market forecast, as the German economy continues to sputter. ECB Mario Draghi held a press   conference and addressed a parliamentary committee in the Bundestag in Berlin. M3 Money Supply fell to 2.7%, below the estimate of 0.3%. Euro-zone Private loans fell 0.8%. The estimate called for a smaller drop of 0.4%. Italian Retail Sales  rose to 0.0%, but still fell short of the estimate of 0.3%. After testing the 1.30 line, the euro is edging downwards. EUR/USD was trading at 1.2983. 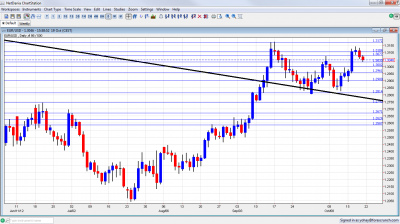 â‚¬/$ kicked off the week by rising from the 1.29 support line (mentioned last week). After crossing the 1.30 line, it continued higher but fell short of the critical 1.3170 cap.

1.3170 worked very well as a double top during September 2012 and is now the top frontier. A failure to tackle this line shows that the pair has limited momentum. 1.3105 provided some support in April and is a rather weak line at the moment.

1.3075 worked as a nice separator in mid October and also in September. 1.3030 provided some support at the same period of time. Both are minor in comparison with the next line.

The very round 1.30 line was a tough line of resistance for the September rally. In addition to being a round number, it also served as strong support. It is now becoming more pivotal and a battleground. It is closely followed by 1.2960 which provided some support at the beginning of the year and also in September and October.

1.29 is a round number that also provided support when the euro was tumbling down back in May. 1.2814 was the peak of a recovery attempt in May and also capped the pair in September 2012. A slide lower in October 2012 almost met this line.

The line starting from February at the 1.3486 peak was formed in March and April. The rally sent the pair surging through this level, as the graph shows. The pair flirted with this line again and again. the recent move towards this line proved to work again as sending the pair away from the line and high.

I turn from bullish to bearish on EUR/USD

Expectations towards the EU Summit indeed pushed the pair higher. The lack of progress in this event  has not been fully digested by the markets. In addition, the pair is still in relatively high ground with the recent range. Hope for the euro could come from a Spanish bailout request, that could have been delayed due to Sunday’s regional elections. However,  Spain is really in no hurry.

In the US, no new big bang is expected from Bernanke after the  QE-Infinity announcement, and unless GDP makes a huge surprise, the euro debt crisis is expected to stay in the limelight.

Greek Debt Could Shrink Rapidly with Leveraged Buy Back

EUR/USD enjoyed hopes for progress in the debt crisis and advanced within its range. With no real breakthroughs, the pair didn't break critical resistance. Is it set to fall now? Public appearances by Mario Draghi,  German Ifo Business Climate and the forward looking Flash PMI's are the main events . Here is an outlook for the upcoming events and an updated technical analysis for EUR/USD.     The EU Summit didn't make progress on debt crisis issues: No announcement about a fresh cash disbursement was made. Also regarding Spain, the lack of progress with a banking union probably didn't help…

Saqib Iqbal10 years
Scroll Up
We use cookies to ensure that we give you the best experience on our website. If you continue to use this site we will assume that you are happy with it.Ok