Euro/dollar  had a horrible week, with drops accelerating on the certainty of another round of Greek elections, and open talk about a Greek exit of the euro-zone. The pair avoided falling below this year’s lows for now. Are more drops likely, or are we in oversold territory?  Here is an outlook for the upcoming events and an updated technical analysis for EUR/USD.

Apart from Greece, also Spain is struggling with higher yields (and a bottomless banking sector) and the Italian economy is squeezing quite rapidly. Italy is currently on the back burner due to Spain and Greece, but Italy and its banks could return to the limelight sooner than later. The only good news came from Germany, whose growth saved the euro-zone from technical recession. But will Germany use its economic strength to keep most of the euro-zone intact? Up to now, the answer has been No. Things could change.

Updates: There are no economic releases out of the Euro-zone as we start the trading week. After last week’s sharp drops, EUR/USD is trading in a narrow range. The pair was trading at 1.2770. Traders should not count on a quiet week,  however. In Greece, the June election could turn out to be a referendum on continued membership in the Euro, and there is more talk of a bailout for Spain. Stay tuned, as events are unfolding almost every day. There is only one release scheduled on Tuesday, Consumer Confidence. The market estimate stands at -20, unchanged from the April reading. With the turmoil engulfing Greece and  Spain,  traders shouldn’t expect any dramatic improvements in this consumer indicator. An crucial EU  Summit is taking place on Wednesday, and  the markets are hoping for some tangible results.  All eyes will be on  Germany’s Merkel and France’s Hollande, who  must quickly iron out their deep differences on how to best fix  the ailing  Euro-zone.   EUR/USD is steady, and was trading at 1.2752. Euro-zone Current Account was outstanding, hitting 9.1 Billion. This was the best reading in years, and easily exceeded the market forecast of 6.0B.  Euro-zone Industial Orders was also strong,  jumping 1.8%. The market estimate called for a drop of 0.1%.  The euro continues  to slide, and it will take more than a couple of strong  economic indicators to  prop up the currency.  All eyes are on today’s EU Summit in Brussels, but it is questionable  if there will be any tangible results from the meeting.  EUR/USD was down, trading at 1.2661. The pair is trading at its lowest level, since January. An unenthusiastic EU Summit did little to calm market jitters about the debt crisis and possible Greek exit from the Euro-zone. Germany is cool to the French proposal to introduce joint Euro bonds, and about the only item the Summit leaders could agree on was a plea to Greece to honor the bailout  agreeement  and implement austerity measures. About the only German economic data was weak, as IFO Business Climate and Manufacturing PMI fell below the market forecasts. Look for the euro to take an even worse beating if German data continues to disappoint the market. EUR/USD was trading at 1.2572. The euro has had a brutal week, shedding about two cents in value against the US dollar. 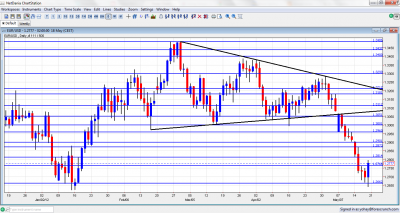 â‚¬/$ opened the week with another gap. At first, the pair traded in a narrow range under the 1.2873 (discussed last week). It then tumbled down and even temporarily breached 1.2660 before making a last minute recovery to close at 1.2777.

Yet again,  the open gap was certainly a bearish sign. Will there be another one.

We start from a lower point this time. 1.3180 capped attempts to rise in May 2012 and is a minor line on the way up. 1.3110 is another minor line that capped the pair in January and later in April 2012 as a stepping stone for a move higher.

1.3050 worked as support in April 2012 and also in March, and is next frontier above 1.30. The round number of 1.30 is psychologically important and proved to be a place of struggle. After the downfall, the pair made another attempt to fight over this line, but this failed.

Very close, 1.2873 is the previous 2011 low set in January, and it returns to support once again. This is a very strong line separating ranges, as also seen in May 2012. 1.2814 provides minor resistance after working as support in the recent fall.

1.2760 is a pivotal line in the middle of a  range. It provided support early in the year and is now of high importance. 1.2660 was a double bottom during January and the move below this line was not confirmed.

The round number of 1.25 is of psychological importance, although not so much on the technical level. Another round number is the next support: 1.24.

Further below, 1.2330 is another historical line.

After uptrend support was broken, a steep downtrend channel is emerging. The pair is now close to the top of this channel, as the chart above shows. This will be interesting to watch.

Even if pro-bailout parties win a landslide victory, the current deadlock is already taking its toll: Greeks are deferring tax payments and withdrawing money from banks. Also privatization is stuck and the country didn’t receive the full tranche of aid. On this background, there is open talk about the dreaded euro exit and contingency plans. Such a “Grexit” will be a huge blow for the euro, at least in the short term. Here’s how to trade the Grexit with EUR/USD.

Spain’s banking issues and Italy’s fast squeeze of the economy are serious worries, even before the Greek domino hits them.  As long as the talk about QE3 remains subdued, the euro-zone’s troubles, have more downside potential.

Euro/dollar  had a horrible week, with drops accelerating on the certainty of another round of Greek elections, and open talk about a Greek exit of the euro-zone. The pair avoided falling below this year's lows for now. Are more drops likely, or are we in oversold territory?  Here is an outlook for the upcoming events and an updated technical analysis for EUR/USD. Apart from Greece, also Spain is struggling with higher yields (and a bottomless banking sector) and the Italian economy is squeezing quite rapidly. Italy is currently on the back burner due to Spain and Greece, but Italy and…