Euro/dollar  finally broke down, lost uptrend support and the critical 1.30 line, as the debt crisis worsened once again. Yet it didn’t collapse. Does this point to a correction, or more  gradual  moves downwards? The upcoming week is packed with events, with GDP figures expected to show that Europe is in a recession. News from Greece and Spain will also weigh.  Here is an outlook for the upcoming events and an updated technical analysis for EUR/USD.

Elections in Greece resulted in a deadlock, and the debt struck country will likely head into a second round of elections in June, as anti-bailout parties gain momentum. Worries and the uncertainty certainly weigh on the euro, together with Spain’s banking issues. The Spanish government’s decisions for the banking system might provide some support, but it seems that Spain is “going Irish” – making the banks’ problems its problems. In Ireland’s case, it ended with a bailout. Will Spain have the same fate?

Updates: EUR/USD gaps below 1.29  when markets open.  Greece gets closer to new elections and to leaving the euro-zone, Merkel’s candidate in general elections loses on proposed austerity measures, and Spain’s Plan C  undermines confidence. EUR/USD is down, trading at 1.2875. The pair  continues to be affected by  the Eurozone’s  worsening political and fiscal problems. German WPI rose 0.5%, beating the market forecast of 0.3%. Euro-zone Industrial Production was a disappointment, declining by 0.3%. The estimate stood at 0.5%. In Italy the 10-y Bond Auction posted figures of 5.66/2.3. There was a host of data for the markets to analyse on Tuesday. French Prelim GDP came in at 0.0%, matching the market forecast. Italian Prelim GDP dropped by 0.8%, below the market estimate of -0.6%. French CPI posted a modest increase of 0.1%. The markets had called for an increase of 0.3%. German Prelim GDP was strong, with an increase of 0.5%. This figure easily surpassed the market forecast of 0.1%. However, German ZEW Economic Sentiment was a major disappointment, plummeting to 10.8 points. This was far lower than the market estimate of 10.8. Italian Prelim GDP fell -0.8%, which was below the market forecast of a 0.6% decline. Euro-zone Flash GDP was a flat 0.0%, which was better than the estimate of -0.2%. Euro-zone Economic Sentiment also was weak, coming in at -2.4 points. The market prediction  called  for a reading of  11.7 points. Finally, Finance Ministers from the EU member states will be meeting on Tuesday. They will  certainly have their hands full with the burning political and fiscal issues  confronting the Euro-zone.  The euro has stemmed its fall for now, as the pair was trading at 1.2859. However, the  currency is unlikely to recover before the political situation is resolved in   Greece. Meanwhile, the crisis in Greece continues, and new elections are a strong possibility. EUR/USD continues to drop, and was trading at 1.2719.   The markets did a good job of predicting Wednesday’s releases.   Euro-zone CPI came in at 2.6%, matching the market forecast. Euro-zone Core CPI posted a reading of 1.6%, a notch higher than the market estimate of 1.5%. Euro-zone Trade Balance came in at 4.3B, exactly as predicted by the markets.  The Italian Trade Balance was higher than expected,  recording  a surplus of 2.06B. This was the best monthly performance in almost three years. In Germany a government auction of  10-y bonds came in at 1.47/1.5.  ECB President Draghi will be delivering a speech later on Wednesday.  The markets will be all ears as talk of a Grexit get louder. EUR/USD briefly  dropped below the 1.27 level, but recovered and was trading at 1.2726. French and German banks are closed on Thursday, and the markets will be quieter, with not Euro-zone releases. There is no pause in the Greek political crisis, however, as elections have been called for June 17. With anti-austerity running high, the new government could reject the bailout package, and there is louder talk of Greece exiting the euro-zone and dumping the euro (cynics might argue it is more a case of the euro dumping Greece). Meanwhile, the    ECB has stopped providing liquidity to several Greek banks as they are severely undercapitalized, and has shifted them to an emergency liquidity assistance program. EUR/USD appeared to have steadied somewhat, but  then dropped below the 1.27 level. The pair was trading at 1.2691. Will the downward trend continue? 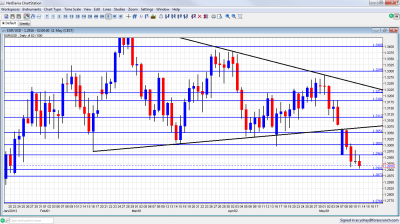 â‚¬/$ kicked off the week with a big weekend gap that sent it below uptrend support (discussed  last week) and below 1.30. While it did recover above 1.30 for a short while, the gap was never closed.

The open gap was certainly a bearish sign. The pair continued lower and eventually traded between 1.29 and 1.2960, before closing at 1.2916.

We start from a lower point this time.  The round number of 1.34 was the top border of the wide 1.30 – 1.34 range. It capped the pair in the most recent surges. The next line below is round as well:, 1.33 was tough resistance 4-5 times, with two attempts before the downfall.

1.3212 held the pair from falling and switched to resistance later on. It proved itself as resistance once again in April 2012.  This was the bottom border of tight range trading in February. 1.3180 capped attempts to rise in May 2012 and is a minor line on the way up.

The round number of 1.30 is psychologically important and proved to be a place of struggle. After the downfall, the pair made another attempt to fight over this line, but this failed.

Very close, 1.2873 is the previous 2011 low set in January, and it returns to support once again. This is a very strong line separating ranges.  1.2760 is a pivotal line in the middle of a  range. It provided support early in the year.

The narrowing channel that characterized the pair for so long was very convincingly broken to the downside.

The results in Greece were worse than expected: no new government and a growing chance that a new  government  will take Greece out of the euro-zone. This might be good for Greece in the long run, but a serious pain for Europe, especially from the feared “domino effect”, including bank runs. A big domino, Spain, is having serious troubles of its own and took an unintended step towards receiving a bailout package. The downside potential is significant, especially as the US remains stable for now.

Euro/dollar  finally broke down, lost uptrend support and the critical 1.30 line, as the debt crisis worsened once again. Yet it didn't collapse. Does this point to a correction, or more  gradual  moves downwards? The upcoming week is packed with events, with GDP figures expected to show that Europe is in a recession. News from Greece and Spain will also weigh.  Here is an outlook for the upcoming events and an updated technical analysis for EUR/USD. Elections in Greece resulted in a deadlock, and the debt struck country will likely head into a second round of elections in June, as…