Euro/dollar  fell around 170 pips to lower ground within the narrowing channel in a turbulent week. Elections in Greece and France over the weekend will set the tone for the whole week, which also features other events. Will the pair stay in the range? Or will events force a breakout? Here is an outlook for the upcoming events and an updated technical analysis for EUR/USD.

The recession is in the euro-zone seems quite deep according to recent PMI figures. Even Germany saw a rise in unemployment. Nevertheless, Mario Draghi is still optimistic and sees the economies recovering in the second half of 2012. Is the bottom really close? Or can we expect another round in the crisis very soon? In the US, NFP showed a gain of 115K, weaker than expected. Yet the drop in the unemployment rate to 8.1% and the upwards revisions of the previous month certainly improve the picture.

Updates: Election results in France and Germany dominated the headlines and news on Monday. In France, voters handed Socialist leader Francois Hollande a dramatic victory, and sent President Sarkovy packing.  Greek voters vent their anger by throwing out the ruling government, but there was no clear winner, as a period of political instability seems likely. The elections will likely set the tone for EUR/USD movement this week. The euro continued to slump, hitting a three-month low in overnight trading, as it dropped below the 1.30 level. The currency has rebounded slightly, as EUR/USD was trading at 1.3034. Investor Confidence did nothing to help the sour mood of the markets, hitting a five-month low. The index posted a reading of -24.5 points, well below the market estimate of -15.4. There was some good news to start the week, as German Factory Orders jumped 2.2%, its best level since December 2011. After a rocky start to the week, the euro has steadied, but the markets are anything but calm following the election results in France and Greece. EUR/USD was trading at 1.3024. In Germany, the ruling coalition suffered a defeat in regional elections, raising concerns about the stability of   the German government. German Industrial Production easily beat the market forecast, posting a strong reading of 2.8%. ECB President Draghi is scheduled to deliver a speech this afternoon, and the markets will be very interested in his take on the elections in France and Greece and the slumping Euro. With coalition talks continuing in Greece, there is growing concern that the country will not be able to honor the terms of the bailout package. Germany and the EU  are becoming  increasingly frustrated with events in Greece, but there is little that they can do besides plead with Greece to honor its commitments. The slumping euro dropped below the 1.30 level, amid concerns that Greece may not honor the bailout agreement.   EUR/USD was trading at 1.2974. There was some good news as both the German and French Trade Balance readings beat the market estimates. The German reading posted a figure of 13.7B, exceeding  the market forecast of  13.4B. The French trade deficit  improved, with a reading of -5.7B. This was a notch better than the market predicition of -5.8B.  French Industrial Production was a disappointment, falling sharply to -0.9%. The market forecast stood at -0.4%. The news was better out of Italy, where Industrial Production beat the market estimate of 0.0%, recording a reading of 0.5%. The French Gov Budget Balance came in at -29.4B. The ECB Monthly Bulletin was released on Thursday. The drama in Greece continues, with no sign of any exit from the current political deadlock. EUR/USD has edged upwards, trading at 1.2955. The markets will be closely watching US Unemployment Claims, which will be released later on Thursday. 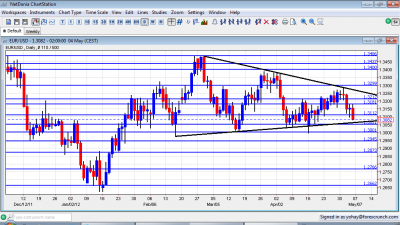 â‚¬/$ challenged downtrend resistance early in the week, but after losing 1.3212 (mentioned last week), a sharper drop was seen. The pair eventually got close to the bottom of the narrowing channel (uptrend support) before closing down at 1.3082.

1.3212 held the pair from falling and switched to resistance later on. It proved itself as resistance once again in April 2012.  This was the bottom border of tight range trading in February. It is now pivotal as a support line.  1.3180 now replaces the 1.3165 line after capping attempts to rise in May 2012. It is a pivotal line now.

As you can see in the chart above, the trading range of the pair is narrowing down. Both lines began in February, with uptrend support being more significant than downtrend resistance. A breach below this line was very temporary in its nature, and an attempt to break above downtrend resistance failed, making the line even stronger now.

Unless we see Sarkozy win and a convincing majority for pro-bailout parties in Greece, the euro will likely suffer from the results, which aren’t fully priced in. They join the serious recession in Europe. In the US, the economy isn’t shining, to say the least, but jobs are still being created and growth is consistent.

Euro/dollar  fell around 170 pips to lower ground within the narrowing channel in a turbulent week. Elections in Greece and France over the weekend will set the tone for the whole week, which also features other events. Will the pair stay in the range? Or will events force a breakout? Here is an outlook for the upcoming events and an updated technical analysis for EUR/USD. The recession is in the euro-zone seems quite deep according to recent PMI figures. Even Germany saw a rise in unemployment. Nevertheless, Mario Draghi is still optimistic and sees the economies recovering in the second…