Currency markets were busy overnight, with a warmer than expected inflation reading out of Australia propping up the Antipodean currency and ramping AUDUSD into the high-88s.  The annualized reading of a 2.7% increase in consumer prices over Q4, which trumped the median analyst estimate of 2.5% rise, has traders scaling back expectations for a rate cut at the next central bank meeting, reversing course from the previous positioning that had market participants pushing the Aussie lower on the prospects the Reserve Bank of Australia would look to ease monetary policy further in a hopes to boost domestic consumption and insulate the non-resource sectors of the economy.

The almost 10 cent fall in the domestic currency since October 2013 has no doubt helped underpin consumer prices, and much like the situation in Canada, acts as pseudo-stimulus for the economy as good and services become more attractive to consumers abroad.  Implied yields for overnight interest rates moved higher after the surprise jump in prices, with the interest rate market signaling the probability of a rate cut by the RBA on  February 4th  has fallen to just above 18%.  The flying Aussie should give corporates that are naturally long the Antipodean currency a chance to offload some near term exposure (a painful trade over the last few months), as the jump could just be a consolidation, or slight breather, before the AUDUSD heads back towards the RBA’s unofficial target of 0.8500.

Elsewhere in Asia, the Bank of Japan kicked off the central bank action for today’s session by holding their policy meeting overnight, retaining their plan for a JPY 60tn-70tn annual rise in the monetary base.  The forecasts from board members on the gradual rise of inflation for Japan did not change from their previous meeting, continuing to see core consumer prices rise to 1.9% in 2015, edging closer towards the BoJ official target.  GDP forecasts were lowered slightly from the estimates at the last policy statement, however in the grand scheme of things, the decision to keep monetary policy unchanged did little to move markets, with USDJPY trading flat in the low-104s. Equities in Asia also saw little reason to get excited about a continuation of the current monetary policy program in place, with the Nikkei ending its session up by just 0.16%.

Also on the central bank slate, the Bank of England released the minutes from the last Monetary Policy Committee meeting that was held earlier this month, with the members of the board reiterating that they saw no immediate need to raise the overnight lending rate if the 7% unemployment rate was hit earlier than previously expected.  There was some speculation the BoE might use the minutes of the meeting to lower the unemployment threshold within its forward guidance from 7.0%, thus strengthening its commitment to not raise rates prematurely; however, the MPC decided to leave this level unchanged, instead echoing that headwinds to growth would most likely keep interest rates at their record low levels even after the 7% threshold was hit.

Coinciding nicely with the release of the minutes from the last MPC meeting, unemployment statistics for the UK also hit the wires around the same time.  Analysts that were polled beforehand had expected the labour market to continue its improvement into the end of 2013, forecasting the jobless rate in November would fall further to 7.3% and the number of workers hitting the dole in December would erode by another 35k heads.  For the quarter ending in November, unemployment fell by the fastest clip on record, coming in at 7.1%, while the number of people claiming unemployment benefits for the month of December fell by less than forecast at 24k.  The strengthening job market increases the likelihood the BoE’s threshold for contemplating an interest rate hike will be met next month, although Carney and Co. have made it clear there is no rush to raise rates even with the employment situation progressing faster than previously expected.  With inflation falling back to the BoE’s target, and the sinking jobless rate still having little follow-through effect on wages yet, the central bank likely has a bit of breathing room before having to seriously consider a rate hike, which will make the inflation readings from the UK a much more important driver of Sterling price action going forward.

With today’s employment statistics the pound is up against the big dollar, with GBPUSD moving into the high-1.65s.  The uptrend for GBPUSD is still intact, with momentum studies still in neutral territory and not looking stretched, thereby suggesting another leg higher could be in the cards for the Sterling before we see a bit of a correction.  The next immediate resistance level for the pair to overcome will be the early January high of 1.6603, which would clear the way for fresh highs in 2014.  If there is a pull-back and the pair cannot sustain a move past the 1.66 handle, the trend-line drawn off the lows from mid-2013 at 1.6300 would have to be violated to the downside in order to confirm a trend reversal, and would act as the next major level of support for a fall in GBPUSD.

The big event for Loonie traders today will be the bank of Canada rate statement and updated monetary policy report, which are both due in a little under an hour.  The subsequent press conference from Governor Poloz should shed a little more light onto anything not quite clear in the rate statement or MPR, with the responses to questions from the press also inciting further volatility for USDCAD should actions or language differ from how the market positioned itself heading into the release.  From price action in both the options and cash markets, it appears as if market participants have been positioning for a slightly dovish steer from the BoC today, covering off the potential for additional CAD weakness after the release.  That being said, we predict that not all the Loonie softness is baked into markets if the central bank switches to an outright dovish bias on the future direction of interest rates, and coupled with the potential for a quick unwind in Loonie shorts if Poloz doesn’t deliver enough pessimism to satisfy the bears, we could be in for a  volatile morning in USDCAD.

Currently, the Loonie is trading flat ahead of the BoC announcement, with traders waiting with baited breath until after  10:00am EST  to adjust positions, keeping USDCAD pinned in the mid to high-1.09s.  Equity future in the US are little changed as well, with an economic docket devoid of any US specific data keeping a lid on any direction as of yet.  Energy continues its charge higher this week, with front-month WTI changing hands at $95.50/barrel and Nat Gas jumping to record highs in New York as the eastern seaboard gets battered by more winter storms. 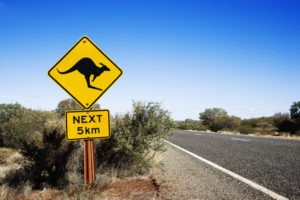 Currency markets were busy overnight, with a warmer than expected inflation reading out of Australia propping up the Antipodean currency and ramping AUDUSD into the high-88s.  The annualized reading of a 2.7% increase in consumer prices over Q4, which trumped the median analyst estimate of 2.5% rise, has traders scaling back expectations for a rate cut at the next central bank meeting, reversing course from the previous positioning that had market participants pushing the Aussie lower on the prospects the Reserve Bank of Australia would look to ease monetary policy further in a hopes to boost domestic consumption and insulate…