While the arrival of the minutes from the last FOMC meeting had been on most traders’ radar for yesterday’s trading session, the policy makers that ended up stealing the spotlight turned out to be the European Central Bank; shaking up markets yesterday morning after an article from Bloomberg cited the ECB was mulling over cutting the deposit rate paid to banks on excess reserves to -0.1%.   While it may be too early to consider negative interest rates on deposits for the December council meeting because of the technical implications it could have on upcoming bank stress tests, it servers to underscore the ECB’s commitment to contemplating ideas aimed at combating the sluggish inflation and lofty unemployment rates in the zone, and the “need-to-do-more” attitude from the central bank should hang as a weight on the EUR in the short term.   The rumors that the ECB could be considering further stimulus measures to promote growth in the currency bloc pushed the EUR lower, dropping over a full big figure into the low 1.34s against the USD, but leveled off as the North American session came to a close.

Sticking with monetary policy makers, the FOMC minutes failed to unveil anything earth-shattering in the way of new information surrounding the Fed’s taper timeline.   Despite the fact that the minutes were very much in-line with what we’ve heard from Bernanke and Yellen over the past couple of days, the discussion around the trimming of asset purchases in the coming months induced a “taper-on” response from markets, with the S&P finishing its session down by 0.36%, sliding further away from the elusive 1,800 mark, while the DXY found willing bidders pushing the USD-linked basket past the 81 handle.   The main takeaway from the minutes was that the Committee remains data dependent as to when they will scale back the growth of their balance sheet (although in our opinion the incoming data on aggregate suggests they will look to do so by Q1 2014), while at the same time looking for ways to strengthen their forward guidance to market participants in order to blunt some of the potential negative reaction associated with a slower pace of asset purchases.   Although a stronger tone towards when the FOMC will first consider rate increases was not decided upon during the October meeting, there were a number of discussions surrounding potential amendments to the Fed’s forward guidance, including; lowering the unemployment threshold from 6.5%, instituting a lower-bound for inflation, or using language to signal that rates would be kept below their long-run equilibrium value even after the first increase.   In our view the minutes do little to alter our assessment of when the first taper will occur, holding our forecast that a slight trimming of asset purchases will transpire at the March meeting in 2014, with an outside risk of seeing this happen in December should the November jobs report be uncharacteristically strong.

Over in Asia, the Bank of Japan was also busy, voting unanimously to hold monetary policy steady, stating they would make policy adjustments as needed and will continue to ease until the 2% inflation goal is stable.   Governor Kuroda also chimed in to reassure markets the BoJ has room to conduct more easing, sending the yen into a   tailspin and pushing USDJPY into the high 100s.   The news that the printing presses in Japan could go into higher gear shortly was welcomed by equity investors, with the Nikkei posting a gain of 1.92% on its session.

The overnight economic docket was characterized by a slew of PMI readings, with the HSBC Flash Manufacturing PMI print out of China coming in on the soft side of expectations at 50.4.   New export orders tumbled to a three month low at 49.4, with the employment sub-index also contracted from last month and slipped below the all-important 50 mark.

The lacklustre Chinese PMI print migrated its way over to Europe, with the composite reading for the common-currency bloc slipping to 51.5 in November from the 51.9 registered last month and short of the 52.0 that was expected.   The gauge for manufacturing hit the median analyst forecast of 51.5, but it was the service sector which acted as a weight on zone, decreasing to 50.9 and missing expectations of a 51.9 print.   The all-too-familiar dichotomy between Germany and the rest of the zone was once again evident, with the backstop of the EZ performing better than expected in November, but unable to lift the surrounding regions within the zone.   The EUR is slightly higher against the USD this morning, but this is mostly as a result of Draghi mitigating some of the bleeding from yesterday, saying that there had been no new discussion on negative rates since the last policy meeting; EURUSD has managed to work its way into the mid-1.34s, but has taken a breather after exhausting willing bidders.

Heading into the North American session, equity futures are pushing into the green and looking to recoup some of yesterday’s losses.   The weakening of the yen on the potential for further monetary easing from the BoJ has investors cautiously optimistic heading into the open, although commodity currencies have yet to benefit from the increased risk appetite, with the AUD, NZD, and CAD all lower against the big dollar.   The Loonie is outperforming its commodity brethren this morning, but is under pressure against its dollar counterpart to the south, with the USDCAD pair pushing back into the high-1.04s.   The Philly Fed Manufacturing PMI from the US could provide the market with some fodder to decipher later in the session, with the strength of the manufacturing sector in Philadelphia playing into the “taper-on/taper-off” atmosphere the markets have been so inclined to follow.

Looking ahead, the next big event for Loonie traders will be the retail sales and CPI numbers for Canada set to be released  Friday  morning.   The headline reading for retails sales is expected to increase by 0.3% from the previous month, slightly warmer than the 0.2% we saw in August, but still not a strong enough print to suggest the Canadian consumer was feeling extremely positive heading into the fall.   Stripping out the more volatile auto sales numbers highlights the forecasted sluggishness, with the core reading slowing to an increase of only 0.2%.   Arguably the more important of the two data points will be the inflation numbers, with the headline reading forecast to slide below 1.0% in October when compared to the last 12 months.   In recent commentary from Governor Poloz he has made it quite clear the Bank of Canada is becoming more focused on consumer prices being persistently below the BoC’s target, and while the BoC chief said yesterday afternoon it would be inevitable rates would go up at some point, it begs the question how many CPI prints south of the 2% target it will take before Poloz begins mulling over additional measures to boost inflation.   A warmer than expected CPI print would generate some decent demand for the Canadian currency, helping to ease Poloz’s concerns surrounding lethargic prices, and giving corporations naturally short USD an opportunity to buy on the USDCAD dip.

What time should you trade forex? 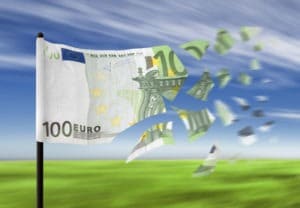 While the arrival of the minutes from the last FOMC meeting had been on most traders' radar for yesterday's trading session, the policy makers that ended up stealing the spotlight turned out to be the European Central Bank; shaking up markets yesterday morning after an article from Bloomberg cited the ECB was mulling over cutting the deposit rate paid to banks on excess reserves to -0.1%.   While it may be too early to consider negative interest rates on deposits for the December council meeting because of the technical implications it could have on upcoming bank stress tests, it servers…