The  Canadian job market rebounded in February from its sluggish condition upon a remarkable addition of 82,300 jobs, most of them full time.   This excellent reading came after a 2,800 drop in January causing unemployment to drop from 7.4% to 7.2%, more good news for the Canadian domestic economy. Will this trend continue? 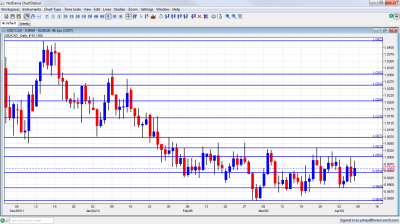 Dollar/CAD started the week with a small shake, before falling to 0.9888, a new line that didn’t appear last week. It the recovered and challenged the clear line of parity before more choppy trading that ended at 0.9959, close to last week’s close.

1.0263 is the peak of surges during October, November and December, but was shattered after the move higher. It’s far at the moment.  The round figure of 1.02 was a cushion when the pair dropped in November, and also the 2009 trough. It is weaker now but remains pivotal.

1.0143 was a swing low in September and worked as resistance several times afterwards.  Closer to parity, 1.0070 provided support around the turn of the year, and is now closer.

1.0030 capped the pair twice in March 2012 and proved to be strong. The very round number of USD/CAD parity is a clear line of course, and was a line of battle that eventually saw the pair fall lower.

Under parity, we meet the pivotal line of 0.9950. It served as a top border to range trading in March 2012 and later as a line in the middle of the range. 0.9888 was a double bottom at the beginning of April 2012 and is a key line on the downside for now.

0.9870 was a trough reached once and challenged afterwards, and serves a bottom border of the range. 0.9830 provided support for the pair during September and is now stronger after a first attempt to breach it failed.

0.9840 served as a strong cushion at the end of February and the beginning of March 2012. 0.9780, where the current run began is the next and important support line.

It is closely followed by 0.9736, which provided support during August 2011.  The veteran 0.9667 line worked as support at the beginning of 2011 and then for several months during the spring. It is a very clear and strong line on the chart.

Oil prices  now turn against the loonie, as well as the weak Non-Farm Payrolls in the US, that trigger worries of soft demand. On the other side of the equation, impressing building permits calm the fear from a Canadian housing bubble, and also strong domestic job figures are certainly good news after many mediocre months.

The Canadian dollar  eventually kept its balance against the greenback, but traded quite choppily. The BOC Business Outlook Survey and Trade Balance are the main events this week. Here's an  outlook  for the Canadian events and an updated technical analysis for the Canadian dollar. The  Canadian job market rebounded in February from its sluggish condition upon a remarkable addition of 82,300 jobs, most of them full time.   This excellent reading came after a 2,800 drop in January causing unemployment to drop from 7.4% to 7.2%, more good news for the Canadian domestic economy. Will this trend continue? Updates: USD/CAD…