EUR/USD had another fantastic week, reaching 14 month highs. Will it stop for consolidation at this point or sail towards 1.40? The Euro-zone rate decision is the main highlight of the week. Will Draghi warn about the exchange rate? Here is an outlook on the main market-movers ahead.

The feeling that the “worst is over” regarding the debt crisis continues to send money into the euro-zone, and lifts the value of the euro. Retail sales from Germany, the euro-zone’s locomotive, disappointed with a drop of 1.7%. Meanwhile, manufacturing PMIs improved in Spain and the Euro-zone but still remained in recession.  Will the Euro-zone stabilize during 2013 in line with predictions? The drop in the unemployment rate is a positive sign, but many more are needed.

Updates: Spanish Unemployment Change was up sharply to 132.1K, but still beat the forecast of 150.0K. Eurozone Sentix Investor Confidence disappointed, dropping 3.9 points. The markets had expected a smaller decline of 2.2 points. Eurozone PPI declined 0.2%, matching the estimate. Spanish Services PMI improved nicely, climbing to 47.0 points. This was well above the  estimate of 44.7 points. Italian Services PMI came in at 43.9 points, missing the estimate of 45.9 points. Eurozone Final Services improved to 48.6 points, just above the forecast of 48.3 points. Eurozone Retail Sales was weak, declining 0.8%. The estimate stood at -0.5%. Italian Preliminary CPI gained a modest 0.2%, matching the forecast. The euro continues to show volatility, as EUR/USD   was trading at 1.3529. German Factory Orders rose 0.8%, exactly as expected. French Trade Balance looked weak as the deficit widened to -5.3 billion euros. The estimate stood at -4.2 billion. Thursday is Day 1 of the EU Economic Summit. French 10-year bonds posted an average  yield  of 2.30%. This was higher than the yield at the previous auction, of 2.07%. German Industrial Production rose a modest 0.3%, beating the estimate of 0.2%. As expected, the ECB maintained its benchmark interest rate at 0.75%. ECB head Mario Draghi will speak at a press conference later on Thursday. EUR/USD was  trading at 1.3546. 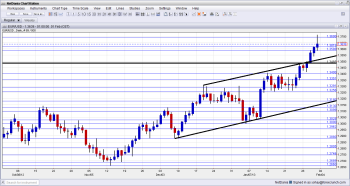 Euro/dollar started the week capped by the mighty 1.3480 line (mentioned last week). After a struggle, the pair made a breakout and found itself capped at 1.3588. When this line was eventually broken, EUR/USD even climbed above 1.37 before retreating to close at 1.3639.

1.40 is the ultimate resistance line for now – this is a round number eyed by many politicians, and also worked as true technical support in the past. Below, 1.3915 capped the pair in late 2011 and is minor resistance now.

1.3690 worked as support during the aforementioned period and is another minor line. 1.3588 worked as a clear separator of ranges during January 2013 and is a key line on the downside.

1.3360 is the recent peak of January 2013 and is a stepping stone for the levels above.  Below, 1.3290 served as resistance before the pair collapsed in May, After many failures to break higher, the euro finally pushed through.

1.3255 provided support during January 2013 and also beforehand.  This is the bottom of the previous range. 1.3170, which was the peak of September, served as support for the pair after the break in December and is a key line on the downside.

1.3130 proved to be strong resistance during December 2012 and now switches positions to support.  1.3110 is a minor line after working as temporary resistance in December 2012.

1.3030 provided some support at the same period of time, and also at the end of November 2012. Both are minor in comparison with the next line.  The very round 1.30 line was a tough line of resistance for the September rally. In addition to being a round number, it also served as strong support. In January 2013 it served as the last line of support, at least for now.

It is closely followed by 1.2960 which provided some support at the beginning of the year and also in September and October – the line is strengthening once again after temporarily cushioning the fall during December.

As the chart clearly shows, uptrend resistance has been clearly broken. the pair in an uptrend channel since mid-December and eventually broke higher. Also a more recent channel on the hourly chart was broken to the upside.

I am bullish on EUR/USD

The flow of money into the euro-zone seems unstoppable. The break of quite a few technical barriers and the inability to participate in the currency wars will probably mean another good week for the euro-zone.The improvement in financial markets currently outweighs the ongoing recession. The higher exchange rate also limits growth prospects by hurting exports. But in the meantime, the “pro-Euro” feeling is very strong.

In the US, the OK employment report and the strong revisions are far from enough to trigger any kind of change in the Fed’s policy anytime soon.

EUR/USD had another fantastic week, reaching 14 month highs. Will it stop for consolidation at this point or sail towards 1.40? The Euro-zone rate decision is the main highlight of the week. Will Draghi warn about the exchange rate? Here is an outlook on the main market-movers ahead. The feeling that the "worst is over" regarding the debt crisis continues to send money into the euro-zone, and lifts the value of the euro. Retail sales from Germany, the euro-zone's locomotive, disappointed with a drop of 1.7%. Meanwhile, manufacturing PMIs improved in Spain and the Euro-zone but still remained in recession.…