Euro/dollar  corrected some of the huge gains following the announcement of QE3. Both Greece and Spain are in the limelight, as uncertainty prevails. Spain will have an opportunity to ask for aid when it presents its budget. In addition, a speech by Draghi, an important German survey and Italian bond auction are among the big events awaiting markets. Here is an outlook for the upcoming events and an updated technical analysis for EUR/USD.

Tensions within Spain are growing after Spanish PM gave a clear negative answer to requests for a new fiscal pact with Catalonia. The rich region is set to accelerate its moves towards secession from Spain, in a not-so-favorable timing for the country. In Greece, the troika took a break after reporting progress. This seems like a repeat of the previous round, that ended in a revolving door  exercise  from the ECB to buy time. In the US, figures remain mediocre, implying the QE3 could indeed be QE-infinity.

Updates: The euro  has gained some ground,  after some choppy trading earlier this week. German data  continues to disappoint the markets.  German Consumer Climate came in at 5.9 points, below the estimate of 6.0  points. This weak figure  came on the heels  of Monday’s German Business  Climate, which plunged to  its lowest level since March 2010. ECB President Mario Draghi  delivered a speech in Berlin. EUR/USD was trading at 1.2959.  The markets were pleased with some positive German data on Thursday. Import Prices jumped 1.3%,  beating the  forecast of 0.9%. Unemployment Claims remained at 9 thousand, slightly lower than the estimate of 10K. M3 Money Supply rose 2.9%, below the forecast of 3.3%. Euro-zone Private Loans  declined 0.6%, well below the market estimate of a 0.1% gain. Euro-zone Retail PMI hit a three-month high,  climbing to  47.1 points. The 10-year yield at the Italian Bond Auction was successful. Yields dropped to 5.24%, well down from the previous release of 5.82%. The Treasury sold 5.645 billion euros worth of debt, close to the near the maximum targeted amount. EUR/USD is steady, as the pair was trading at 1.2888. 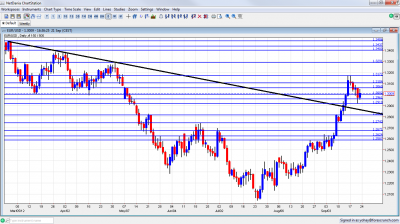 â‚¬/$ began the week at the highs seen in the previous one, but gradually slid lower. After an encounter with the 1.30 line (discussed last week), the pair continued lower and bottomed out at 1.2920 before starting a new struggle with 1.30.

The very round 1.30 line was a tough line of resistance for the September rally. In addition to being a round number, it also served as strong support. It is now becoming more pivotal. It is closely followed by 1.2960 which provided some support at the beginning of the year and also in September.

1.2920 worked as both support and resistance and is becoming an important cushion for the pair. 1.2814 was the peak of a recovery attempt in May and also capped the pair in September 2012.

The line starting from February at the 1.3486 peak was formed in March and April. The recent rally sent the pair surging through this level, as the graph shows. While  the pair is sliding towards this line, the presence of the pair above it is positive for the euro.

After the big correction from the QE3 move, there is room for a renewal of the upwards move, especially as US unemployment doesn’t look too encouraging. With Greek issues probably moved out of the way for the short term, the debt crisis sharpens its focus on Spain.

The euro-zone’s fourth largest economy could be in one of its darkest spots, but perhaps closer to dawn. A lot depends on the new budget presented on Thursday and a potential progress towards receiving aid from the ECB. Submitting an aid request is long overdue. Will Spain rest after the successful auction? Or will it move forward before conditions become unbearable?

Euro/dollar  corrected some of the huge gains following the announcement of QE3. Both Greece and Spain are in the limelight, as uncertainty prevails. Spain will have an opportunity to ask for aid when it presents its budget. In addition, a speech by Draghi, an important German survey and Italian bond auction are among the big events awaiting markets. Here is an outlook for the upcoming events and an updated technical analysis for EUR/USD.     Tensions within Spain are growing after Spanish PM gave a clear negative answer to requests for a new fiscal pact with Catalonia. The rich region…