Latest
You are at:Home»Majors»USD/JPY Outlook April 8-12

Dollar/yen had a very exciting week, sliding lower only to break to new multi-year highs as the BOJ introduced an all out plan. Current Account, Monetary Policy Meeting Minutes and Tertiary Industry Activity  are the main events this week. Here’s an outlook for the Japanese events and an updated technical analysis for USD/JPY.

Last week, The Bank of Japan under new Governor Haruhiko Kuroda, lived up to its expectations delivering a comprehensive monetary easing program, to end years of deflation, vowing to double its government bond holdings in two years and pursue quantitative easing as long as it needed to achieve its 2 percent inflation target. In addition the BOJ wishes to introduce open-ended asset purchases to buy 7 trillion yen in long-term JGBs a month. Markets welcomed the radical change in the BOJ policy, raising Japanese shares and lowering the yen.  Will Kuroda’s changes prove successful? The yen remained weak despite a very disappointing jobs report in the US. A price of 100 for USD/JPY is not that far. Let’s Start:

Updates: Japanese Current Account dropped from 0.46 trillion yen to 0.00 trillion. It was the first time since November 2012 that the country failed to produce a current account surplus. Economy Watchers Sentiment came in at 57.3 points, beating the estimate of 56.3. Preliminary Machine Tool Orders continues to plunge, dropping 21.6%.  The BOJ released its Monetary Policy Meeting Minutes. At its previous meeting last week, the BOJ decided to radically alter monetary policy and double the monetary base. Following the policy meeting, the yen dropped sharply. Bank Lending will be released later on Tuesday. USD/JPY is testing the 99 line. The pair was trading at 98.95. Bank Lending gained 1.6%. Core Machinery Orders bounced back from a sharp decline of 13.1%, climbing 7.5%. This easily beat the estimate of 6.9%. CGPI continues to point to deflation, as the indicator dropped 0.5%. The estimate stood at 0.4%. M2 Money Stock rose 3.0%, edging past the estimate of 2.9%. USD/JPY has edged lower, as the pair was trading at 98.42.

USD/JPY daily chart with support and resistance lines on it. Click to enlarge: 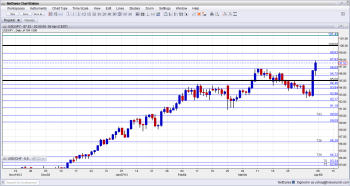 Dollar/¥ began the week with a slide, and was capped by the 93.84 line (mentioned last week) and dropped under 93 before Thursday. It all dramatically changed on the historic BOJ decision: the pair jumped 300 pips higher, and then continued more gradually another 200 pips to touch the all important 97.80 and eventually close at 97.52.

Looking above 100, we find the 101.44 line, which was the post crisis high seen in April 2009. The obvious number below is the very round number of 100 and this is marked as the next target.

The March 2013 peak of 96.71 is the next line, which now switches to support. 95.88 provided a temporary stop and now serves as minor support.

The round number of 95 is also watched by many and will remain critical support on a reversal. The previous February 2013 peak of 94.40 should be noted.

A second move towards that line in February fell short, but the pair made it in March. 93.84 was an initial peak for the pair as it climbed higher and has served as a cap afterwards.

The line is weaker now. 91.20, which capped the pair very temporarily on its way up in January 2013, is a support line and is now stronger. The ultimate support line for now is 90 – a target marked by many analysts and a round number. This line remains close after the break.

I am bullish on USD/JPY

The general direction of USD/JPY continues to be the topside, and this will probably continue at an accelerated pace now.  after the all important decision. The pace that the BOJ expands its monetary base are significantly wider than those of the US, when compared to the GDP. In addition, the psychological impact of this huge step and the bond buys will probably cause some outflows out of Japan, that will strengthen other currencies against the yen. Kuroda didn’t wait for the reappointment (which eventually happened after the decision) and gave all he had in the first meeting.

The impact of this move was already seen on the backdrop of a poor NFP report: the yen stopped and strengthened for a very short period of time before resuming the fall.