EUR/USD rode on the dollar weakness and reached higher ground. Can this strength continue? German Consumer Sentiment, inflation and employment data all precede the all-important rate decision and the accompanying “Draghi show”. Here is an outlook on the main market movers and an updated technical analysis for EUR/USD, now on higher ground.

Last week PMI releases in the Eurozone continued on a positive note, German Ifo Business Climate  advanced further, in line with market expectations, climbing to 106.2.  Spain’s unemployment rate posted an unexpected decline down to 26.3%. All these encouraging releases raise hope for a pick-up in economic activity in the euro-zone. How will Draghi see it? In the US, data remained quite mixed: not good enough to prevent the greenback from falling. 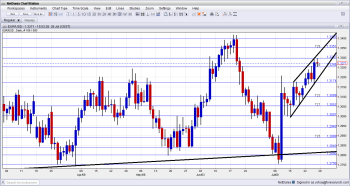 Euro/dollar started the week by moving above the 1.3175 line (mentioned  last week). This line eventually served as support. It then traded in a clear range between 1.3175 to 1.3255 before making a break higher.

We start from higher ground this time. 1.3520 was a swing high in February, before the pair tumbled down. 1.3480 was part of a head and shoulders pattern seen in January and February.

1.33 capped the pair quite strongly during July 2013. 1.3255  provided support during January 2013 and also beforehand. A recovery attempt failed to reconquer this line at first, but after the break, the line is now  strong support.

1.3175  capped the pair during July 2013 and works as another line of defense for any moves to the downside. It proved its strength during July 2013 . 1.3100 is worked as temporary resistance in December 2012 and is becoming more important once again, after capping a recovery attempt in June and then in July.

It is followed by 1.3050, which proved be strong support in May 2013, defending the round number in more than one occasion, but it is less significant now.

The very round  1.30  line  was a tough line of resistance. In addition to being a round number, it also served as strong support and recently worked as a pivot line. 1.2940 is the next line of support. It worked as such during April and May 2013.

Lower,  1.2890  worked in both directions during 2012 and was the beginning of the uptrend support line. It is becoming more important, as a clear separator of ranges. 1.2840 worked as a cushion for the pair during May 2013.

Lower, the round number of  1.28  was the bottom of a long term wide range in 2012 and its breach in May 2013 was not confirmed. Below,  1.2750  worked as a separator of ranges during November, and stopped the pair’s drop in March. This is a key line on the downside, as clearly shown in the first week of April and then in July.

EUR/USD made a significant dive below downtrend support, but this lasted only a few hours. From there (and from 1.2750) the pair shot higher. This line is still worth noting.

As the lines show, EURUSD is trading in an uptrend, narrowing channel since mid July. Uptrend resistance is steeper than uptrend support. A break higher would be good news for the bulls. A break to the downside would need to be convincing, after the false break that occurred recently (described above)

There are some signs of improvement in the old continent which are hard to ignore:  German PMIs are positive  and euro-zone PMIs have advanced. In Spain, unemployment took a dive for a change (to 26.3%) and the  political crisis  isn’t taking over. Also in France, there are some signs of optimism. Greece was given its tranche of aid without drama. Italy remains in trouble. So, the picture isn’t bright, but the situation isn’t as bad as it was. Draghi could push the euro lower, but given his mood swings, the upcoming press conference might be positive after  a negative one last time.

In the US,  economic signs  remain  mixed. Tapering isn’t fully priced in, so positive US data (especially the NFP) could certainly boost the dollar. We will probably see a lot of action in the upcoming week, but the pair could end the week close to where it starts it.

If you are interested a different way of trading currencies, check out the  weekly binary options setups, including EUR/USD and more. Further reading:

EUR/USD rode on the dollar weakness and reached higher ground. Can this strength continue? German Consumer Sentiment, inflation and employment data all precede the all-important rate decision and the accompanying "Draghi show". Here is an outlook on the main market movers and an updated technical analysis for EUR/USD, now on higher ground. Last week PMI releases in the Eurozone continued on a positive note, German Ifo Business Climate  advanced further, in line with market expectations, climbing to 106.2.  Spain's unemployment rate posted an unexpected decline down to 26.3%. All these encouraging releases raise hope for a pick-up in economic activity…