This was one of the most intense weeks euro/dollar saw, trading in a range of 400 pips and eventually closing lower. 7 events are awaiting us this week, in addition to the eventful drama around the debt crisis. Here is an outlook for everything that rocks the euro, and an updated technical analysis for EUR/USD.

Europe between hope and despair:  The debt crisis was raging and will likely continue. When it became clear that Trichet’s intervention is only half hearted, the euro fell, together with stock markets and commodities. When his demands from Italy became clear, Italy’s prime minister came out to the press. Berslusconi announced his surrender to the ECB with fresh austerity measures.

US between hope and despair: For a change, the all important Non-Farm Payrolls report was good. When the markets closed with a feeling that not all is gloomy, S&P downgraded the US, for the first time ever.

Update, Sunday, 13:36 GMT: The ECB is holding an emergency meeting to discuss buying of Italian bonds. This can boost the euro at the beginning of the new week.

Update, Tuesday, 12:00 GMT The ECB bond buying scheme is working perfectly well, with Spanish yields back to 5%. And now, all eyes are on the Federal Reserve.

Update, Wednesday, 19:30 GMT: The euro was hit by the rumors of a bankruptcy of Societe Generale, a large French bank. The rumors started a stock market crash that sent EUR/USD to the low end of the range.

Update, August 11th, 13:30 GMT: EUR/USD is trading very choppily, hurt by talk of an Asian bank cutting credit lines to French banks. On the other hand, the stability in Italy and Spain sure helps the euro. 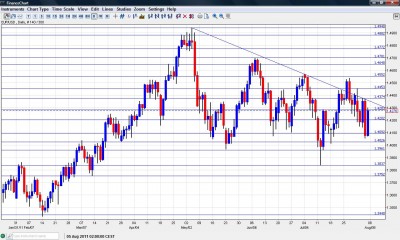 Technical levels, from top to bottom

In case that the euro runs higher, 1.4940 is the highest level this year, and currently the final frontier. Minor resistance is at 1.4882, a peak that later worked as support.

1.4775 is a significant line in high ground, after being pivotal when the pair traded there. 1.47 follows as a minor line.

1.4650 was a peak in the past and is minor resistance. 1.4550 is already a stronger line beneath. It worked perfectly a few weeks ago, and is a key level for an upside run.

The resistance line of 1.4450, which was an important line in the past, and had different roles beforehand is now of very high importance, after the pair bounced against it once again.  1.4375 returns to have a prime role – it worked as precise resistance just now.

The peak of November 2010 at 1.4282 is is still with us. Yet again, we’ve seen that it works better as resistance than as support. 1.42 managed to cap recent rises, and is also a round number, serving as minor support now.

1.4160 has a minor role after being run through too many time. Moving lower, the round number of 1.41 provides further weak support.

Just above the round number of 1.40, we find very important support at 1.4030 – it was successfully tested just now.  Lower, 1.3950 was a pivotal line when the pair traded in lower ranges and proved that it is of high importance. After the comeback, this line was another clear support line.

The bottom of 1.3838 will be closely watched in another fall. This was also a line of support last year. Below, 1.3750 is significant support, if the pair falls to a five month low.

Downtrend resistance has been broken two weeks ago. On the other hand, we can see how it returned to provide resistance once again in the past week (see graph. So, it should still be watched.

I turn from bearish to neutral on EUR/USD.

The debt crisis, that pushed the pair lower, is far from over. But volatility is quite extreme, and there are some reasons for a rise now. If Trichet accepts Berlusconi’s surrender and finally makes a serious, heroic intervention in the bond markets, it can provide some relief for the euro in the short run. Note that too much bond buying will eventually be interpreted as euro printing, and will have the opposite effect. On the other side of the Atlantic, the historic downgrade by S&P is likely to weigh on the dollar at first, but the long term implications are questioned. One thing is certain: another exciting week is ahead.

Here are some recommended reads on the pair:

This was one of the most intense weeks euro/dollar saw, trading in a range of 400 pips and eventually closing lower. 7 events are awaiting us this week, in addition to the eventful drama around the debt crisis. Here is an outlook for everything that rocks the euro, and an updated technical analysis for EUR/USD. Europe between hope and despair:  The debt crisis was raging and will likely continue. When it became clear that Trichet's intervention is only half hearted, the euro fell, together with stock markets and commodities. When his demands from Italy became clear, Italy's prime minister came…