Euro/dollar  had a very positive week, riding on new hope for the old continent. Is this a desired correction, or a change in trend?The euro-zone will now receive fresh growth indicators, an important survey and other events. Here is an outlook for the upcoming events, and an updated technical analysis for EUR/USD.

After talks about the Greek haircut broke down last week, they resumed and apparently yielded a deal. Also Spain’s auctions distanced it from the danger zone and helped the euro. Yet in Greece’s case, it’s important to remember that a 50% haircut isn’t a 50% reduction of debt, and that only the fragile banks will suffer and not the ECB. Not yet.

Updates: Euro/dollar continues higher despite big troubles in securing a deal for Greece. The euro can certainly cheer by the positive PMIs released in Europe, showing that a recession isn’t a done deal. 1.3060 is very strong resistance at the moment. Good news from Germany was quickly washed away as Greece is getting closer to a default. The pair lost the 1.30-1.3060 range and is trading one leg lower. EUR/USD rallies strongly after a deal on Greek PSI seems closer once again, German figures continue to shine and especially as Ben Bernanke surprised by  extending the pledge for low rates until late 2014. EUR/USD is struggling around the 1.3145 line. See how to trade the US GDP with EUR/USD. 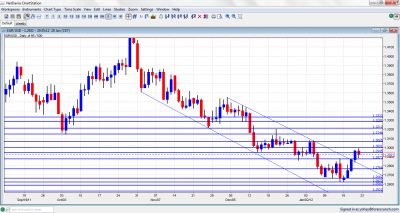 Euro/dollar began the week with a gap lower, testing the lows of 1.2620, discussed last week. The rest of the week was totally different: the pair move higher, and the break above 1.2873 left it clearly behind, even if 1.30 wasn’t reached.

We begin from higher ground this time. 1.3330 provided some support for the pair during December 2011 and is minor now. 1.3280 had a similar role at the same time, and is stronger.

1.3212 held the pair from falling and switched to resistance later on.  Very important resistance is at 1.3145 which was the lowest point recorded in October 2011, was only broken for a short time from the other side.

1.3085 was the top border of a very narrow range that characterized the pair towards the end of 2011. It also provided support back in December 2010 and had a pivotal role. The round number of 1.30 is psychologically important and also worked as some support. After the breakdown, it was shattered and is now weak.

The 1.2945 line is weaker now after being broken in January, but still provides resistance. 1.2873 is the previous 2011 low set in January, and it returns to support once again. This is a very strong line separating ranges.

Even lower, 1.2520 is another minor support line, before the round number of 1.24, which was of importance a long time ago.

The pair can be seen as trading in a parallel, yet wide channel. Downtrend resistance is more significant than downtrend support, even thought it dates back only to December. It was broken just now and needs to be watched. Downtrend support starts in October, but is far from the pair at the moment.

The Greek debt deal is not that positive as it doesn’t really help Greece, and hurts banks, yet it certainly helped the euro. In addition, it opens the door for a Portuguese default. The upside comes from the successful Spanish auctions, which may serve as a model for Italy. All in all, the crisis is far from resolution, and a temporary balance is likely to be a pause before a fresh downfall as the euro is punching above its weight.

Euro/dollar  had a very positive week, riding on new hope for the old continent. Is this a desired correction, or a change in trend?The euro-zone will now receive fresh growth indicators, an important survey and other events. Here is an outlook for the upcoming events, and an updated technical analysis for EUR/USD. After talks about the Greek haircut broke down last week, they resumed and apparently yielded a deal. Also Spain's auctions distanced it from the danger zone and helped the euro. Yet in Greece's case, it's important to remember that a 50% haircut isn't a 50% reduction of debt,…