Latest
You are at:Home»Minors»NZD/USD Outlook August 13-17

The New Zealand dollar was hit by weak Chinese data, new worries from Europe and bad employment data at home. Retail sales and Producer Price Index figures are the main events this week. Here’s an outlook for the events in New Zealand, and an updated technical analysis for NZD/USD.

Last week, New Zealand’s job data revealed an unexpected contraction in the number of jobs dropping 0.1% in the second quarter while expected to gain 0.3%, following 0.4% increase in the first quarter.  The weak reading also affected unemployment rate climbing 0.1% to 6.8% while forecasted to reach 6.5%. Will NZ job market continue to decline?

Updates: FPI dropped sharply in July, as the consumer index gained only 0.2%. Core Retail Sales, a key indicator, will be released later on Monday. The kiwi has edged upwards, as NZD/USD is trading at 0.8124. Core Retail Sales were up 0.9%, just below the estimate of 1.0%. Retail Sales jumped 1.3%, easily beating the market forecast of 0.7%. The kiwi lost some ground, dropping below the 0.81 line. NZD/USD was trading at 0.8090. Business NZ Manufacturing Index will be released later on Wednesday. NZD/USD has steadied after earlier losses. The pair was trading at 0.8046.

NZD/USD daily chart with support and resistance lines on it. Click to enlarge: 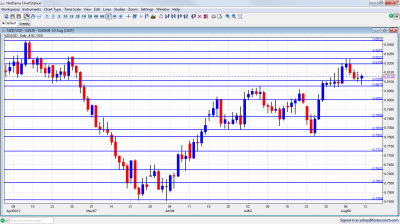 Kiwi/dollar tried moving to higher ground early in the week, but found fierce resistance at 0.8220, a line that didn’t appear last week. After some range trading on higher ground, the pair changed direction, fell, and eventually closed at 0.8128.

0.8075 was the peak in July 2012 and replaces other lines in this region. This is the highest in 3 months. The round number of 0.80 managed to cap the pair in November and remains of high importance, especially due to its psychological importance. It was hit by the recent moves and somewhat weaker now.

Another round number, 0.79, is key resistance, after being a very distinct line separating ranges. It proved its strength also in June 2012. 0.7840 provided support for the pair several times during June 2012 and also worked as resistance back at the end of 2011.

I am bearish on NZD/USD

With worries from China and weak employment data in Q2, the picture is much darker now for the kiwi, that enjoyed strong GDP in Q1.

Get the 5 most predictable currency pairs
Previous ArticleGBP/USD Outlook Aug. 13-17
Next Article 5 Signs that Israel is Close to Attacking Iran