Last week Canadian domestic growth rate has rebounded in June after 0.3% drop in the previous month. This rise was in line predictions indicating Canadian economy is back to expansion. Will this trend continue? 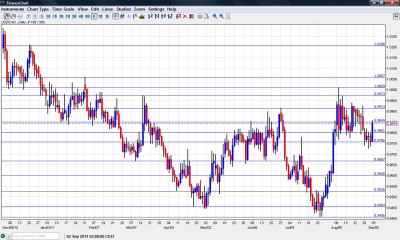 The Canadian dollar had a good start to the week: USD/CAD dropped and even occasionally breached the 0.9750 line (mentioned last week). But towards the end of the week, the tables turned and the pair eventually closed higher, just under 0.9850.

The last line above parity is 1.0060. This was the highest level in 2011 and is getting closer.  The very round number of USD/CAD parity is the obvious line below, and it returns to strength after the recent test.

Under parity, we have two close lines – 0.9977, which was a trough in 2010, was also tested at the beginning of March and proved to be significant on the recent rise.  Below, 0.9915 was a peak back in June and is now minor resistance, after being run through recently.

0.9850 was a swing high in May, and now proved to be tough resistance. It will be tested early in the week. The round number of 0.98 also served as a cushion, and its role is stronger now, after serving as significant resistance.

0.9750 was a very distinctive line earlier, separating ranges in a great way. It provided a bouncing spot for further moves higher and proved to be strong, even though it was temporarily dipped below just now. 0.9667 was a cushion in March and later worked as resistance. This line provided support a few weeks ago, and had an important role in holding back recovery attempts, over and over again. The break above it pushed the pair quickly.

0.96 was a minor support line that played a role earlier in the year. It is weaker now.  0.9520 becomes a minor line after being shattered. It worked as support and also as minor resistance during April. It managed to cap the recovery attempt for some time.

I remain bullish on USD/CAD.

The Canadian economy cannot avoid the serious slowdown in the US: it is highly dependent on its southern neighbor. Falling oil prices also add to the weight on the loonie – pushing USD/CAD higher.

The  Canadian dollar  followed the US weakness and retreated.  A busy week is a head with the rate decision, employment figures, housing data and Ivey PMI. Here's an  outlook  for the Canadian events, and an updated technical analysis for the Canadian dollar. Last week Canadian domestic growth rate has rebounded in June after 0.3% drop in the previous month. This rise was in line predictions indicating Canadian economy is back to expansion. Will this trend continue? USD/CAD  daily chart with support and resistance lines on it. Click to enlarge: Let's Start: Rate decision: Wednesday, 13:00. The Bank of Canada maintained…