Euro/dollar  couldn’t hold to gains, as the second Greek bailout deal couldn’t be sealed. Is Greece close to a breaking point? The initial GDP releases are the highlights this week, as news from Athens continues flowing. Here is an outlook for this week’s  events and an updated technical analysis for EUR/USD.

ECB President Mario Draghi left rates unchanged and expressed a lot of confidence in the press conference. In a last moment statement, Draghi also left the door open for an ECB contribution to Greece. Unfortunately for Greece, it first has to comply with the troika’s demands and pass harsh austerity legislation, before it is awarded any help.

Updates: The Greek parliament approved austerity, and the euro goes up. Nevertheless, worries that Greece will renegotiate the terms after the elections limit the rally. The euro got some energy from the optimistic economic sentiment. Yet the heavy doubts about Greece weigh heavily on the pair, which is now lower in the range. See how to trade the Euro-zone GDP with EUR/USD. The pair now trades in a downtrend channel, but the milder than expected recession in Europe, and especially in France certainly keeps the pair afloat. There is a war of words between the Germans and the Greeks about Greek meeting conditions. Together with lower chances of dollar printing in the US, the pair is around 1.30, struggling in a falling channel. There are growing signs that  deal for Greece  is coming on Monday. This sent the pair to a higher range. Also Elliott Wave analysis points to higher levels  in February. 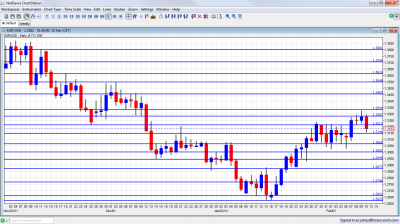 EUR/USD opened with a small gap lower and quickly covered it. It then surged. After crossing the 1.3212 line, mentioned  last week, the line switched to support, that was eventually lost (although the line remained a distinct separator), and the pair returned to the range, closing at 1.3182.

We start from the round number of 1.38, that stopped the pair in September and also later on. It is weak and distant resistance. 1.37 had a similar role at the same time and also worked as support afterwards. It is stronger resistance.

1.3450 was support in November and then switched to minor resistance. It used to be a stronger line, but is only minor now.  1.3330 provided some support for the pair during December 2011 and is a stronger line now. EUR/USD got close to it in February 2012.

Quite close by, 1.3280 had a similar role at the same time, and is now weaker, after serving as a battleground and being shattered. 1.3212 held the pair from falling and switched to resistance later on. This is a key resistance line, as seen more than once in February 2012.

The 1.3145 line, which was the lowest point recorded in October 2011, is now a pivotal line in the middle of the range, with a slightly stronger role. 1.3060 was the top border of a very narrow range that characterized the pair towards the end of 2011. It is now key support on the downside after serving as the bottom border of the range and despite a temporary move under this line.

The round number of 1.30 is psychologically important but is much weaker now. It was a pivotal line before Bernanke’s rally.  The 1.2945 line is stronger once again and still provides support.

1.2873 is the previous 2011 low set in January, and it returns to support once again. This is a very strong line separating ranges.  1.2760 is a pivotal line in the middle of a recent range. It provided support early in the year.

Greece is close to a breaking point. With the union of policemen threatening to arrest troika representatives, anti-austerity parties gaining traction in polls and a truly dire economic situation, Papademos will have a hard time in passing austerity. Even if everything goes well, the situation will continue deteriorating, as seen many times in past, and new measures will be needed. Of course, Portugal is around the corner. And now, the euro-zone will officially see  that it is heading into a recession, so the debt burden will persist.

In the US, the dovish sentiment remains despite improving signs. QE3 is still possible in March, but this topic will likely be sidelined this week.

Euro/dollar  couldn't hold to gains, as the second Greek bailout deal couldn't be sealed. Is Greece close to a breaking point? The initial GDP releases are the highlights this week, as news from Athens continues flowing. Here is an outlook for this week's  events and an updated technical analysis for EUR/USD. ECB President Mario Draghi left rates unchanged and expressed a lot of confidence in the press conference. In a last moment statement, Draghi also left the door open for an ECB contribution to Greece. Unfortunately for Greece, it first has to comply with the troika's demands and pass harsh…