The Canadian dollar suffered significant losses against the greenback in the past week. Housing starts and Trade balance are the highlight of this week. Here’s an outlook for the Canadian events, and an updated technical analysis for USD/CAD.

Update, Monday, 23:00 GMT: The Canadian dollar is retreating, also suffering from the plunge in oil. USD/CAD Parity is in sight.

Update, Wednesday, 19:30 GMT: USD/CAD managed to recover from the drop that it had when Bernanke announced a two year rate stall. Oil prices are stabilizing lower, and this doesn’t help the loonie.

Last week the Canadian job market gave mixed signals amid an unexpected small gain of only 7,100 jobs in July while cutting unemployment rate to 7.2% from 7.4% in June The weak rise is believed to derive from the slowdown in the US. This slowdown, together with the credit downgrade are likely to weigh on America’s northern neighbor. 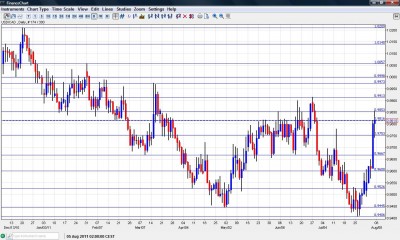 Dollar/CAD was on the upwards move throughout the week. When the 0.9667 line (mentioned last week) was crossed, the move accelerated, with the pair eventually bouncing off only at 0.9853.

The last line above parity is 1.0060. This was the highest level in 2011 and is getting closer. The very round number of USD/CAD parity is the obvious line below, although it isn’t too strong.

Under parity, we have two close lines – 0.9977, which was a trough in 2010, was also tested at the beginning of March and proved to be significant. Below, 0.9915 was a peak back in June and will provide some resistance on an upwards move in that direction.

0.9850 was a swing high in May, and capped the pair just now. 0.9816 capped the pair over and over again and it will be a pivotal line at the beginning of the week. It is somewhat weaker.

0.9750 was a very distinctive line earlier, separating ranges in a great way. It provided a bouncing spot for further moves higher. 0.9667 was a cushion in March and later worked as resistance. This line provided support a few weeks ago, and had an important role in holding back recovery attempts, over and over again. The break above it pushed the pair quickly.

0.96 was a minor support line that played a role earlier in the year. It is weaker now. 0.9520 becomes a minor line after being shattered. It worked as support and also as minor resistance during April. It managed to cap the recovery attempt for some time.

I am bullish on USD/CAD

The crash in oil prices, that was triggered by Trichet, together with the historic credit downgrade of the US by S&P, will weigh heavily on the Canadian dollar. Canada is very dependent on the US. In addition, the domestic figure of Ivey PMI plunged, erasing the half full glass of the Canadian job figures.